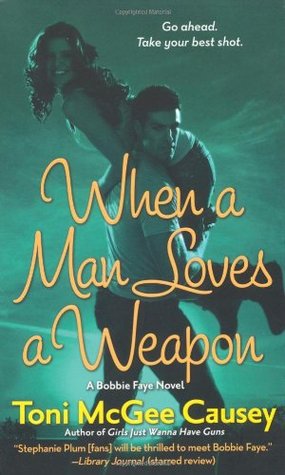 Synopsis: Living single in her trailer was great for a time. But now Bobbie Faye’s officially engaged to, and has purchased a home with, the hottest FBI agent on the beat: Trevor Cormier. Even though she still has no idea what he really does on the job, Bobbie Faye has never been happier…until Trevor gets called away on an urgent assignment and leaves her in the care of body-guard slash babysitter Riley.

As it turns out, Bobbie Faye could use a little extra security. The man she helped put in behind bars, the murderous Sean MacGreggor, has escaped from prison…and is dead-set on revenge. With still no word from Trevor—who was only supposed to be gone for three days—Bobbie Faye finds herself reluctantly turning to her detective ex-boyfriend Cam for help. He’s willing to do whatever it takes to protect Bobbie Faye…so long as Trevor stays out of the picture. For good.

Review: Well I did it, yes I am weak! I read the first two books in French and it’s been a while since I expected the release of the third novel. But it seems that it’s compromised… but well I still hope that the other readers will have the opportunity to experience the final book in this trilogy one day.

Bobbie Faye is engaged to Trevor and everything happens for the best. Indeed, they have already bought a house, he cares for her and does everything to make her happy. But there is a downside and Bobbie is always full of nightmares after the events of volume 2, and she is struggling to recover from all that. But everything will change when early in the book, Trevor finds himself with a mission he gives no details about. A mission that should last only three days max and, before leaving, our FBI agent is nice enough to leave a gift to Bobbie, a beautiful bodyguard who also has the function as a babysitter. And you suspect it, it is not at all, but not at all to the taste of our heroine. Especially as this character is more than annoying in all circumstances. As a bonus, he hates her, which does not help the situation either. And after 7 days, as they still don’t have any news, our disastrous duo decides to understand what is happening and to investigate the Trevor’s disappearance. Okay this is Bobbie who decided it and Riley has no other choice but to follow her, but still! And of course, who is the only person to whom she turns to for help? I’ll give you a thousand: Cam! He has however only one thing in mind, to make our heroine understand that she is not made for Trevor as he is the only one who can suit her perfectly. I must say that this is something quite comical to see especially when the two men are in the same room. To all this, a vengeful Sean is added and he would do anything to hurt Bobbie and Trevor after what they did to him. We also learn much more about our FBI agent and his history, things that even our heroine did not know about.

It was a new good book and a pretty good end, but it’s true that I would have liked another sequel. We wonder throughout the novel who our heroine will choose for her life and it is true that it is a difficult decision. I confess that I would like a relationship with both to see the differences. It’s a kind of Stephanie Plum book with a Ranger and a Morelli … but it is difficult to see her choose as we would like her to stay with the two throughout the novels. But no, here our heroine chooses the one she really wants to keep even if the other is far from accepting the decision. Apart from this, we also attend many disasters because when Bobbie Faye is there, they are everywhere. It was very funny to follow her but also quite sad to see how she ends up. All the characters we know are here, participating directly or indirectly in all the events of the story.

To conclude, it was a happy ending even if it is true that I would have liked something different (maybe). I wonder if one day we will have something more, I would love that.