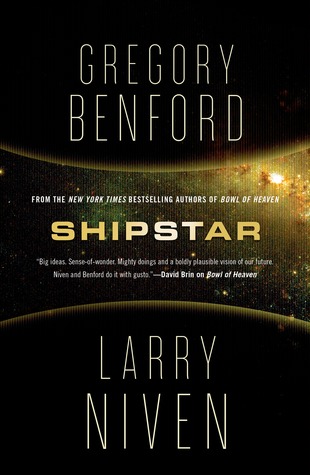 Synopsis: Science fiction masters Larry Niven (Ringworld) and Gregory Benford (Timescape) continue the thrilling adventure of a human expedition to another star system that is jeopardized by an encounter with an astonishingly immense artifact in interstellar space: a bowl-shaped structure cupping a star, with a habitable area equivalent to many millions of Earths. And which, tantalizingly, is on a direct path heading toward the same system the human ship is to colonize.Investigating the Bowl, or Shipstar, the human explorers are separated—one group captured by the gigantic structure’s alien inhabitants, the other pursued across its strange and dangerous landscape—while the mystery of the Shipstar’s origins and purpose propel the human voyagers toward discoveries that transform their understanding of their place in the universe.

Review: I did it again: I jumped in at book two instead of first reading book one.

And there was lots of confusion again.

The book starts with a chapter from the viewpoint of what turns out to be an alien, and it is clearly assumed I should know the background and history of the alien-human contact so far.

Next the story moves on to a group of humans and it’s again assumed I know why one of them is injured, and what happened before.

So you can imagine what a hard time I had getting into the story and figuring out what was going on. And with multiple alien species and two groups of humans that is a lot.

But reading on I slowly eased into the story and world and started to enjoy the book. Especially the world building is intricate and very detailed. At times it even overshadowed the story a bit, to be honest. And not everything made sense, but the writing was pleasant enough that I didn’t mind too much.

I did grumble a bit about this book being a bit preachy at times, (Yes, yes: I know we’re all a nasty polluting bunch) but otherwise this is a nice SciFi story that relies heavily on its complex world building.

All in all I should probably have read book one as well to get the full experience, but after a rocky start this book is an enjoyable read on its own as well.