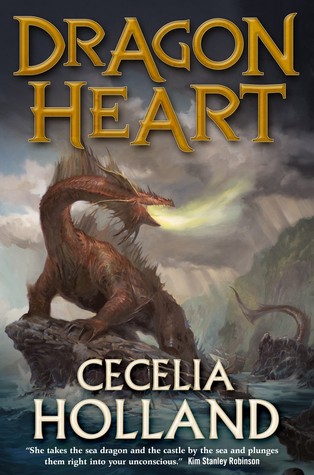 Synopsis: Where the Cape of the Winds juts into the endless sea, there is Castle Ocean, and therein dwells the royal family that has ruled it from time immemorial. But there is an Empire growing in the east, and its forces have reached the castle. King Reymarro is dead in battle, and by the new treaty, Queen Marioza must marry one of the Emperor’s brothers. She loathes the idea, and has already killed the first brother, but a second arrives, escorted by more soldiers. While Marioza delays, her youngest son, Jeon, goes on a journey in search of his mute twin, Tirza, who needs to be present for the wedding.

As Jeon and Tirza return by sea, their ship is attacked by a shocking and powerful dragon, red as blood and big as the ship. Thrown into the water, Tirza clings to the dragon, and after an underwater journey, finds herself alone with the creature in an inland sea pool. Surprisingly, she is able to talk to the beast, and understand it.

So begins a saga of violence, destruction, and death, of love and monsters, human and otherwise.

Review: For a book called Dragon Heart there not enough dragon in it I think.

Apart from that major grumble this is a nice enough read.

There are a bit too much viewpoint characters in my opinion, and I’d have liked a bit more in the way of world building, but overall the story is interesting once you get over the fact it’s more about Castle Ocean than it is about a dragon.

Some of the names were confusing. There’s one character named Broga, who is a man, but I kept forgetting who he was, because Broga sounded like a female name to me. Then there’s Oto: a name that kept dragging me out of the story, because it looks wrong to me (Otto being a family name).

Because of the many different characters it was difficult to get a feel of all of them, plot often overtaking character building, but even so I had some I liked, and some I loathed. In true G.R.R. Martin tradition no one character could expect to survive just because they were made viewpoint character though, so I feared for the lives of my favorites.

I myself wasn’t swept away by this story, but enjoyed it well enough. I’d advice this book to fans of plot based Fantasy, who don’t mind switching back and forth between several viewpoint characters.