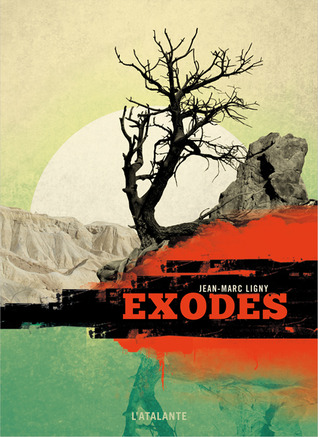 Synopsis: Global warming is packed to the point that Earth became a planet hostile to life. Everywhere, civilization collapses, men don’t have long to live, and they know it.

Will we, as Pradeesh Gorayan and his family, in the enclave in Davos under a dome, continue our routine as if nothing had happened?

Will we, like Mercedes Sanchez, Spain, take refuge in religion and expect Angels to come from heaven to take us to the garden of Eden?

Will we, as Italian Paula Rossi, sell our body and soul for some drugs?

Will we, like Melanie Lemoine, devote our ultimate forces to save the remaining animals?

Will we, as Olaf Eriksson Marine and his wife, flee Lofoten look for a little more hospitable land, devoided of any human presence?

It’s the time of exodus, and, like termites on a burning log, the last men run in all directions to escape hell…

Review: Jean-Marc Ligny tells the story of various characters living on an earth almost destroyed by global warming. We are therefore following their struggles to survive on this earth which became almost uninhabitable.

I thoroughly enjoyed the style of the author who is one level higher than that of many books that we can read today. So that makes Jean-Marc Ligny one of the two French authors whose writing I admire (the other author Frédérique de Keyser who writes in another genre with great skill).

This is a post-apocalyptic novel that gives us a vision of our future because everything about the evolution of earth, because of global warming, is credible. As for human evolution, I do not know… I want to think that men can not become Blasters or Death Eaters.

This novel is the best of the kind I’ve read because of the strength of the writing by Jean-Marc Ligny and the realism of the story. However, I do not recommend it to everyone because it is missing one little thing: hope.

13 thoughts on “Exodes by Jean-Marc Ligny”