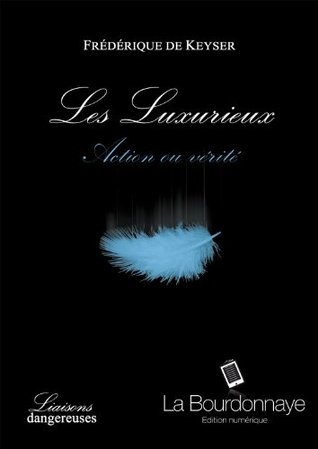 Two men. Two former companions of the same demon. One looking for love, the other running away from it. What can gather them can also separate them. Is it best not to give expression to their immediate attraction?

Review: Action ou vérité (Truth or Dare) is one of the 5 short stories that are grouped under the name Les Luxurieux (The Luxurious). This short story can be read independently and of the Luxuria saga. However, for this, I think that reading the Luxuria saga allows to appreciate the psychology of the characters.

The main characters are Terry and Hadrien, two humans, who are the former companions of the demon Voan (he is one of the main characters of Luxuria and only quoted in this story). They are forced to cohabit, are attracted to one another, but their very different natures and old wounds prevent them from getting closer.

This is the first time that Frédérique de Keyser fully develops a homosexual relationship; in Luxuria it is more suggested. I think the challenge is met in a very beautiful way. I really do not have words to explain it, except to say that it’s very intense !!! I really enjoyed this story 🙂

I have never been particularly attracted by MM romances but it is the third that I’ve read and enjoy it. In my view, we should not read them by dozens, as do some people because it’s fashionable, but rather choose and savor them!

See you later, I still have three other short stories to devour 🙂