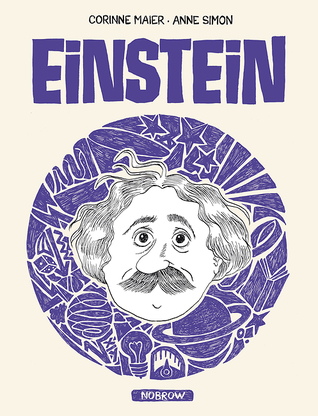 Synopsis: The third in Corinne Maier and Anne Simon’s collection of graphic novels exploring the lives of some of the most influential figures in modern history lands its spotlight upon Albert Einstein, the German-born physicist who developed the theory of relativity. He is considered the most influential physicist of the twentieth century.

You’ve probably heard of him, but you’ve never seen him like this!

Review: Everyone knows Einstein, right? But despite a great name, and some fantastic researches, I did not really know the details of his life. Thanks to this comic, we can discover the life of this great man that we all know from his birth to his death, all with well-made drawings and a story with a touch of humor that I think was not necessarily easy to place.

I did not know much about this scientist, and myself working in sciences, it was interesting to discover his so atypical life, his ideas, his beautiful discoveries. But we also learn about his family life, and it was not necessarily simple on that side. We see the difficulties he had over the years, finally seeing that science was only what interested him, women also but not necessarily his, and we can see that his children were not very important to him. Sciences were actually his only reason for living.

In conclusion it was a great discovery. Something very different and despite the complicated history, I found that the author and the illustrator had done a nice job.