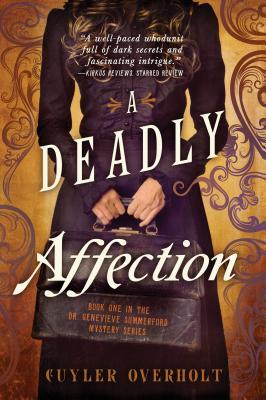 Synopsis: In 1907 New York, a psychiatrist must prove her patient’s innocence…or risk being implicated in a shocking murder

As one of the first women practicing in an advanced new field of psychology, Dr. Genevieve Summerford is used to forging her own path. But when one of her patients is arrested for murder-a murder Genevieve fears she may have unwittingly provoked-she is forced to seek help from an old acquaintance.

Desperate to clear her patient’s name and relieve her own guilty conscience, Genevieve finds herself breaking all the rules she’s tried so hard to live by. In her search for answers, Genevieve uncovers an astonishing secret that, should she reveal it, could spell disaster for those she cares about most. But if she lets her discovery remain hidden, she will almost certainly condemn her patient to the electric chair.

Review: Most of you don’t know that but I always wanted to become a psychiatrist and I even tried two years of medicine for it. The competition being what it is in France, I was not able to complete this course and I finally did chemistry (not great similarities, I know). But when I saw that the story staged a psychiatrist, a time in the early twentieth century and of course an investigation at the same time, I admit that I could not resist and I am very happy!

Genevieve is a young woman marked by her past but who is determined to achieve her objectives, that is to say, to create a career as a psychiatrist although few believe in her. It must be said that the period is not necessarily suitable in relation to this but it does not change her desire to help others. It is in fact during the first group session she manages to prepare to help persons to handle grief that she meets with Eliza. This young woman has lost a child, drowned, but she also carries the grief of the little girl taken from her when she was 15. But now she would like to find her. For this, Geneviève advises her to confront the doctor and to demand to know what happened to her. Alas, this view will prove to have disastrous consequences when her patient is found near the doctor’s body the next day …. Two possibilities are then offered to our psychiatrist: Eliza killed the man and she therefore would be partly responsible (as she wouldn’t have realized the psychological fragility of the young woman) or what Eliza says is true and another person was present that day and would have struck the fatal blow. Although Genevieve is convinced of the innocence of her patient, a doubt remains and our heroine will be determined to understand what is really going on.

I found this was a really fascinating investigation, a mixture of money, ethics, and pending investigation which completely takes us throughout the chapters. We easily manage to understand Genevieve, her desire to help Eliza, even though nobody seems to notice her, to evolve as she wishes even if her father would rather see something else. She will do everything to help the young woman to the point to put herself in danger. Yet she surely did not expect to discover an ancient network of adoptions, and to draw attention from dangerous people. But all this is only the beginning of something much more terrible and I found that the author brought her revelations perfectly, leaving us guessing before confirming gradually our assumptions. There are many surprises and it is true that the story is well mastered, surprising by many sides and I admit that I really did not expect all this.

In any case, I can tell you that I had a great time. I’m happy to hear that this book is part of a series because I’m really curious to read more. I was really blown away by the whirlwind of her life and I was delighted to have discovered all these ideas. A very good surprise!

24 thoughts on “A Deadly Affection by Cuyler Overholt”