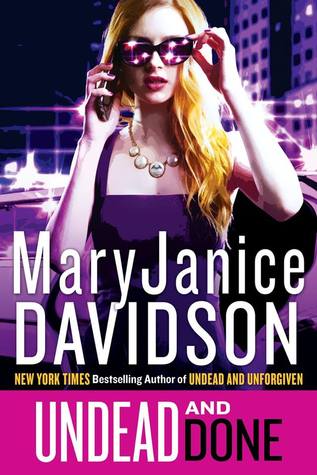 It had been a well-kept secret for centuries, but now the existence of vampires is all over the news, thanks to Betsy Taylor’s half sister (and the frustrated former Antichrist), Laura. Life for the undead will never be the same, and it’s up to Betsy to do some damage control. But her interview on the local news doesn’t exactly put out the fire. It more or less pours kerosene on it.

With all the added attention on supernatural beings, the werewolves are more than a little agitated (never a good thing) and demand that Betsy gets her interview skills, and her family, in order. And while things go from bad to worse in the world, Hell continues to be hell—especially when Betsy’s new parole program becomes about as complicated as you’d expect.

With a PR team launching a vampire-friendly campaign, the devil at large and out to make trouble, and mermaids on hand to see who falls—and how hard—the end isn’t just near. It’s here. And if anyone knows how to go out with a bang, it’s the queen of Hell.

Review: I have not read all the volumes in the series, I admit, but I have always had a pleasant time with all those I have discovered. So it is true that I was curious to read this last volume and to see how the story of our dear Betsy ended.

It would seem that, to take revenge, Laura, Betsy’s sister, revealed the existence of the vampires in the world. But to the surprise of all, our queen confirmed this fact and even perhaps mentioned without meaning to the existence of the werewolves who are not necessarily very happy with that. Besides having to deal with all the consequences of this remark, that is to say the arrival of the werewolves, or the vampires, plus all the journalists or even their opponents, Betsy must also manage Hell. Indeed, she decided to create a probation program to send some people back to earth to redeem their fault and it’s Jennifer’s turn here.

We follow in this book a lot of things and it is true that there is no time out. It was a very interesting novel and I was curious to see where the story was going to lead us. It was quite funny because the format of the story is different from what we used to have. Indeed, we pass from the present to the past from one chapter to the other without a precise order like a puzzle whose pieces are gradually assembled. I enjoyed discovering a little more about Jennifer and her past by following some of her chapters at the same time. Yes, a lot is going on in this book and I was surprised by some of the characters’ actions as I did not expect them for the most part. The author concludes the characters’ story fairly well, although it is true that some tracks remain somewhat open to make us understand that even if the problems are settled here, others will still occur.

I really enjoyed discovering this last volume and I think it will really please the fans of the series.

27 thoughts on “Undead and Done by MaryJanice Davidson”