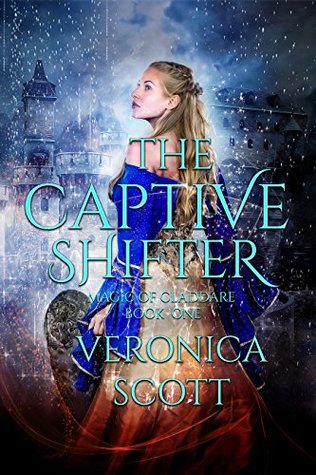 Synopsis: Concealing her own considerable magical powers, Caitlyn enters the service of the northern Witch Queen masquerading as a simple healer. Under order from her goddess, she’s searching for a magical gem stolen long ago from her own people, believed to be hidden in the massive castle. The task is daunting but Caitlyn is sure she can locate the gem and escape, bringing the prize back to the temple where it belongs. Until she meets the captive shifter and her loyalties become dangerously divided.

In payment for her past services to his people, Kyler the leopard shifter has entered into a life of servitude far from his forest home, allowing the Witch Queen to tap his magic to power her ever darker spells. Factions at Court are threatening to turn the Queen to the Shadow. Her increasing demands for magic will cut short his nearly immortal lifespan. Kyler’s resigned to his fate until the day he crosses paths with the new arrival, whose secrets and magic entice and attract both man and leopard. Has he met his mate at last?

The Queen will never willingly release him from captivity. Caitlyn’s goddess refuses to grant her any delay in accomplishing her own task. Can they locate the magical gem, fight the Shadow and win free of the Witch Queen to earn the right to be together?

Caitlyn let the caravan master do the arguing on her behalf, although she wanted to reach through the bars of the city gate, grab the officious man standing in her way and shake him. Such a simple request—open the gate, glance at her papers and let her go on my way.  It lacked but half an hour till sunset and the captain of the guard at the ancient city’s portal wasn’t inclined to allow a long caravan to pass so late in the day.

Lazy bastard. She eyed him, tempted to use some of her magic to influence him but inner caution held her back. This was the city of witches and magic. She needed to go slowly displaying her abilities. Calm down, breathe. None of this will go as I hope if I let myself show anger. Caitlyn sucked in a deep breath of the damp air and stood straighter, adjusting her hood to keep the autumn drizzle off her face.

“Camp on the meadow across the river,” the captain said from the other side of the gate, addressing the caravan master. “Return in the morning.”

Glancing at Caitlyn, the old man shook his head. “I’ve told you, one of my passengers is an applicant, identified by the queen’s Searchers. She must be at the palace tonight, for the welcoming ceremony. She can’t wait until morning or risk losing her place in this year’s Trial.”

As she edged closer to the arched entryway to get out of the increasing rain, impatience burned along Caitlyn’s nerves. Why did a petty tyrant have to be her final obstacle after the long journey?  The caravan master was right; she did have to be at the palace tonight. After three weeks of slow travel from her home in the South it was especially galling to be so close to missing the deadline. To literally stand on the threshold of her destination and be refused entry was unbelievably frustrating. All right, honeyed words first, then there’s nothing for it but to unleash a taste of magic on him. Pasting a smile on her lips, she stepped forward, allowing her cape to fall open, deliberately swaying her hips a bit. “Please, captain, I’m sure the Witch Queen would appreciate your extra efforts to let me arrive on time. The Searchers told me every woman with power is greatly needed this year,” Caitlyn said, in an effort to cajole him. “How about permitting me past the gate by myself tonight? Admit the entire caravan tomorrow?”

Grinning like a cat toying with a mouse, the officer shook his head emphatically, shaking a finger at her. “Against the rules. We do the entire group or none. Now come back in the morning!”

The caravan master took her elbow, probably to escort her to the waiting wagons. Caitlyn jerked her arm free, ready to summon energy to bespell the officer into giving her entry. Folly to risk using power so soon in this place but he left her no choice. She pushed aside the next worry, about finding her way through the unknown city to the castle.

A new voice entered the conversation. “Is there a problem here?”

Behind the blustering captain, the other soldiers had snapped to respectful attention and were saluting two newcomers. The first gentleman walked forward into the torchlight at the gate proper. He was older than she, dressed in black and burgundy garments projecting a subtle message of wealth and power. Attractive, if one was looking for a bedmate, which she wasn’t. As the second man came into the light Caitlyn took a step back, blinking.

She’d never seen his like before. A shapeshifter? Why would such a rare creature of magic be here?  The power surrounding him was palpable to one with her gifts, yet didn’t flare in her second sight as it should. As if the magic was restrained but how could such a thing be possible? Dressed in a uniform similar to the officious gatekeeper’s, this man was clearly a warrior – muscular, handsome, high cheekbones, piercing green eyes, long, unbound sandy blond hair. But why would a shapeshifter be in this dank, gray city? His people ran in the massive forests of the North, where their kind ruled and humans walked at their peril. A city, much less a Court with all its ritual and routine, would be the last place to find such a wild and free spirit.

He returned her gaze with open appreciation. Caitlyn lowered her eyes first.

13 thoughts on “Spotlight: The Captive Shifter by Veronica Scott”