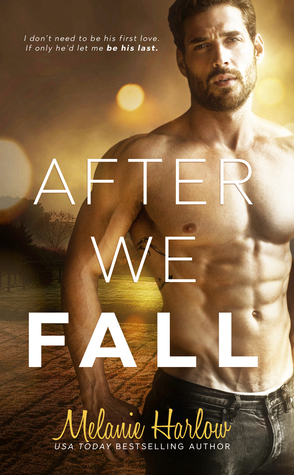 Sexy, brooding cowboys are fine in the movies, but in real life, I prefer a suit and tie. Proper manners. A close shave.

Jack might be gorgeous, but he’s also scruffy, rugged, and rude. He wants nothing to do with a “rich city girl” like me, and he isn’t afraid to say so.

But I’ve got a PR job to do for his family’s farm, so he’s stuck with me and I’m stuck with him. His glares. His moods. His tight jeans. His muscles.

Pretty soon there’s a whole different kind of tension between us, the kind that has me misbehaving in barns, trees, and pickup trucks. I’ve never done anything so out of character—but it feels too good to stop.

And the more I learn about the grieving ex-Army sergeant, the better I understand him. Losing his wife left him broken and bitter and blaming himself. He doesn’t think he deserves a second chance at happiness.

I don’t need to be his first love. If only he’d let me be his last.

Review: I did not know about the author or her novels but when I heard about After We Fall, I confess that I was intrigued!

Margot has always been the perfect girl her parents wanted, without ever having any conflict in society. In any case, this is the case until her ex-boyfriend asks her in marriage and the next day she finds him announcing his wedding with another woman. For many, launching scones to his head at a charity event means nothing but for Margot this is the new scandal of the city. In order to keep herself cool, she decides to use her marketing skills to help a family to make their farm more attractive. Yet, although everyone is delighted with her arrival, one of the brothers, Jack, seems to hate her at first sight as well as all her ideas!

This is not an easy mission for Margot but she seems determined to do anything to do her job! She’s going to have to deal with Jack and the prison he’s been creating since he lost his wife and yet … Nothing predestined them to have a story together, he hated her, but sometimes the heart has its reasons . It really was not an easy story and I admit that I sometimes hated Jack for the harm he was doing to Margot. I even shed some tears for her. But at the same time, thanks to him, our heroine will also succeed to change, to assume herself and finally do what she always wanted. It was nice to see this young woman get rid of her parents’ requests to try to be happy.

It was a very nice novel to discover and I discovered that there are several volumes in this series even if the characters seem different. I’m curious.

19 thoughts on “After We Fall by Melanie Harlow”