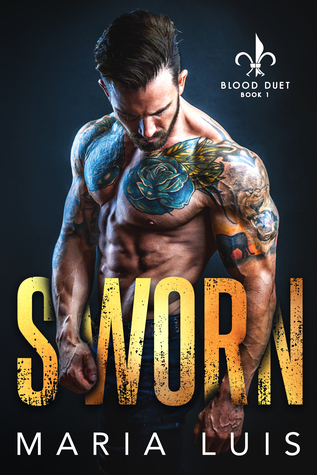 Synopsis: I bow to no man.

The words are tattooed on my skin, just as they’re branded on my heart.

But I never planned for Sergeant Lincoln Asher, a man as deceptive as he is cold. His dominance sets my teeth on edge . . . and my body on fire. He won’t stop until I’m his, but I’m not his to take.

My secrets bind me—and blind me.

I live in the shadows of New Orleans. Hidden and protected in the underworld I call home. I know who I am.

I vow never to kneel before a man…

And he will be my downfall.

Review: This is a novel by Maria Luis that is completely different from what I had tried before. It’s really nice to see that the author manages to move from one style to another like that! Yes, because Sworn is much darker than what I had read from her before.

Avery has been running from her past since she was a child, since her stepfather killed her mother, and to avoid being next on the list. So yes, she left and lives in the shallows of New Orleans, drawing cards for people. However, her life was completely disrupted by the arrival of Sergeant Asher. This man is very different from what she expected, and he makes her feel things like never before. They both have secrets that may well catch up with them.

It’s pretty hard to rule on Asher. He’s impressive, and at the same time it’s quite complicated to know if he’s nice or mean. And then there’s Avery. We understand her mistrust for men after everything that has happened and yet she lets herself get caught up in a world of which she knows nothing about. What made me a little bit upset, however, is that Avery is a virgin and that’s true that it’s always tricky for me. But apart from that, I had a good time, and what about that end? Arghhhh I didn’t expect it at all. I’ll tell you one thing, you need the sequel right now!

8 thoughts on “Sworn by Maria Luis”