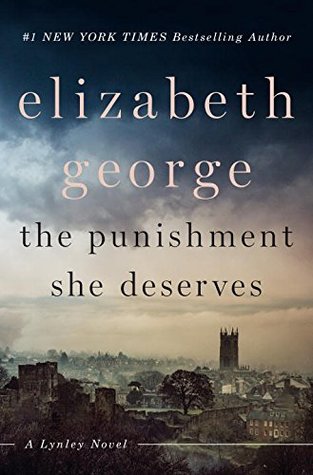 Synopsis: Detective Sergeant Barbara Havers and Detective Inspector Thomas Lynley are forced to confront the past as they try to solve a crime that threatens to tear apart the very fabric of a quiet, historic medieval town in England

The cozy, bucolic town of Ludlow is stunned when one of its most revered and respected citizens–Ian Druitt, the local deacon–is accused of a serious crime. Then, while in police custody, Ian is found dead. Did he kill himself? Or was he murdered?

When Barbara Havers is sent to Ludlow to investigate the chain of events that led to Ian’s death, all the evidence points to suicide. But Barbara can’t shake the feeling that she’s missing something. She decides to take a closer look at the seemingly ordinary inhabitants of Ludlow–mainly elderly retirees and college students–and discovers that almost everyone in town has something to hide.

Review: This is a series I didn’t know about, but I must admit that the synopsis intrigued me. Well, you may think that starting a series with the 20th volume may be complicated, and you’ll probably be right by the way, but I figured that like all series of this genre, a different investigation is always highlighted in each volume. This novel was no exception to the rule.

I think that, even if there are some points that would have been clarified if I had read the previous novels, I didn’t really have big problems of confusion. Besides, I had a really good time. I was a little scared at first, because I had a little trouble getting into the novel. However, I am glad I hung on to it, because this investigation was really exciting. Moreover, I was very surprised: it was the first time I saw such a big novel for this genre, but it was really perfect!

We find Lynley, Barbara and Isabelle for an investigation that could hide many secrets. A deacon died, this deacon who is accused of paedophilia killed himself in a cell. It might be easy to explain and yet…. When the police starts investigating the case, they don’t expect everyone to hide the truth, believing they can protect their own. However, little by little, they will unravel the true from the false and I must admit that the whole thing was really very well done.

It was a really very interesting novel and I am now curious to discover the other novels to learn more about all the characters!

13 thoughts on “The Punishment She Deserves by Elizabeth George”