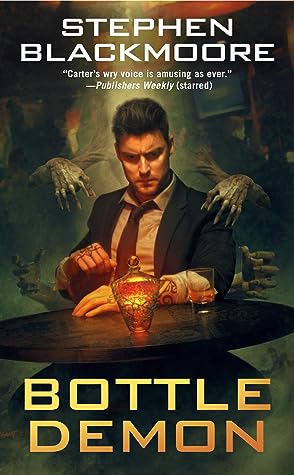 After being attacked by a demon in the one place he thought he was safe, Eric Carter has been killed, his soul sent to take its place as a stand-in for the Aztec god of death Mictlantecuhtli. But somebody on Earth isn’t done with him, yet. Somebody with the power to bring him back from the dead. He doesn’t know who, and worse he doesn’t know why.

Between an angry death goddess, family secrets steeped in blood, a Djinn who’s biding his time, and a killer mage who can create copy after copy of himself, Eric’s new life looks to be just as violent as his last one. But if he doesn’t get to the bottom of why he’s back, it’s going to be a hell of a lot shorter.

Review: I really like this darker series and I was curious to find Eric Carter again.

I was very surprised by the story, because the novel starts when Eric is resurrected. He doesn’t understand what happened but one thing doesn’t change: everyone is still trying to kill him. It’s been five years since he died and many things have changed during his absence. The problems remain the same and Eric will have to use all his allies to figure out what is going on.

Once again, I had a great time with this series. It was a real pleasure to see all the characters. The novel gave me the impression of being a transitional volume, but that’s not a problem. Gabriela is an important protagonist in this story and while I would have liked to have seen Vivian, we do hear about her. Of course, we see Darius as well, but many other characters as well.

Yes, this was again a very nice book in the series and I’m looking forward to read the next one.