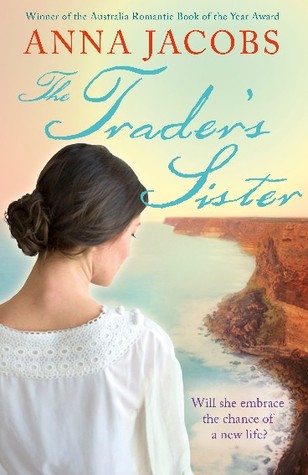 Synopsis: Ismay Deagan has one wish in the world – to leave Ireland and join her brother, Bram, in Australia. But her father has other ideas and orders her to marry their vicious neighbour Rory Flynn, even though she can’t stand him.

After Rory brutally attacks her, Ismay runs away, disguising herself as an impoverished young widow. When she meets Adam Tregear on the ship, she finally starts to believe her dreams of future happiness may come true.

Before she reaches Australia, however, she’s flung into adventures in Suez, Ceylon and Singapore. Dare she tell Adam the truth about who she really is? Does he have secrets of his own? Or will her past catch up with her and ruin her new-found happiness?

Review: The author writes original historical romances, multiple series that intersect and even if I do not remember all the stories, it is always a pleasure to find the characters.

We follow this time, mainly, the story of Ismay and Adam. Ismay is the sister of Bram that we met in the first volume. She dreams of joining her brother in Australia but her father has decided otherwise. He wants her to marry the man she has hated since childhood: Rory Flynn. And he is ready to do anything for that! He even goes as far as to let the young man attack his daughter. Ismay decides to flee and succeeds, thanks to her employers, in leaving for Australia. On the other side, we follow Adam who receives in legacy of goods in Australia and who must decide if he accepts them or not. His father has always hated him and he knows that he has many surprises in store for him.

This was a very enjoyable novel. I enjoyed getting to know Ismay and seeing her strength despite everything she goes through. Nothing is easy and yet she moves forward as best she can. Adam is a character tht I liked, as is his aunt Harriet. And it was a treat to discover their story. I was quite surprised, but you also read about other characters’ stories that I loved seeing again.

Anna Jacobs’ novels are always very interesting and I follow them with pleasure.

9 thoughts on “The Trader’s Sister by Anna Jacobs”