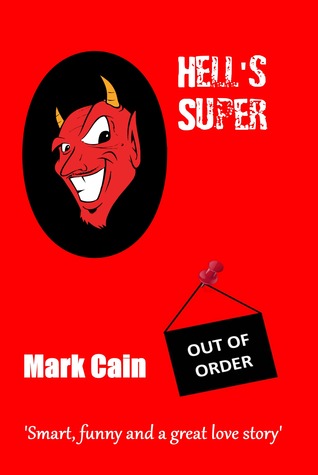 Synopsis: How can one damned handyman keep all Hell running when everything’s always breaking, devils and demons plot against him… and he’s terrible at fixing things?

Steve is Hell’s Super, its handyman. Being Mr. Fixit to the Underworld keeps him and his assistant, Orson Welles (yes, that Orson Welles), pretty busy, since things go on the blink all the time down there.
No malfunction has ever created so much inconvenience, though, as the malfunction of Hell’s Escalator, which leads from the Pearly Gates to the depths of Hades. What’s worse: the breakdown appears to be sabotage. Satan calls in Steve to investigate.

But Steve is distracted these days. He’s in love with Flo, a gorgeous, almost saintly figure who has come to Hell by choice to ease the suffering of the damned. What’s more: she seems to like him, but romance in Hell? That could never be.

Still, solving the mystery of the Escalator could earn him some points with Satan, maybe even a chance with Flo.

Review: Steve is the superintendent of hell and he is not good at it… That is the point, this is his punishment. He somehow manages to fix a lot of things with his duct tape. His assistant, Orson Welles, can not fix anything by himself but can only help Steve. Both will try to repair the Escalator of Hell while we meet other inhabitants. There is Florence Nighthingale (Steve is in love with her) who could have gone to Heaven but chose to come help the damned in Hell, Booh (Bat Out OF Hell), and many more.

It is not hilarious but it is a funny and enjoyable book to read. The plot is interesting, but there are breaks in the story to explain the operation of Hell, it does not help because the pace of the story is already slow.

The series consists of four books. I do not have much more to say on the 3 volumes following this one. I gave the rating of 4 stars for books 2 and 3 because I found an improvement in the narrative rhythm. However, the book 4 received a rating of 3 because the plot was a little too predictable and expected.