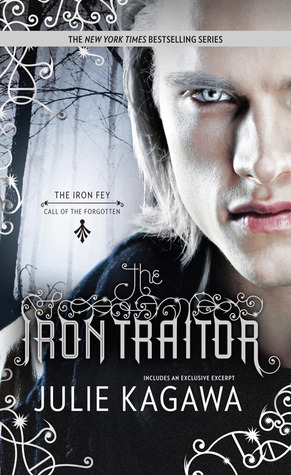 The Iron Fey: Call of the Forgotten, Book 2

Synopsis: In the real world, when you vanish into thin air for a week, people tend to notice.

After his unexpected journey into the lands of the fey, Ethan Chase just wants to get back to normal. Well, as “normal” as you can be when you see faeries every day of your life. Suddenly the former loner with the bad reputation has someone to try for-his girlfriend, Kenzie. Never mind that he’s forbidden to see her again.

But when your name is Ethan Chase and your sister is one of the most powerful faeries in the Nevernever, “normal” simply isn’t to be. For Ethan’s nephew, Keirran, is missing, and may be on the verge of doing something unthinkable in the name of saving his own love. Something that will fracture the human and faery worlds forever, and give rise to the dangerous fey known as the Forgotten. As Ethan’s and Keirran’s fates entwine and Keirran slips further into darkness, Ethan’s next choice may decide the fate of them all.

Review: I was curious about the Ethan and Kierran’s adventures  even if it is true that I still prefer the original series. It is always interesting to follow Meghan’s brother as well as her son. Especially when we have the chance to see her appearing in short episodes.

Ethan hoped to return to his normal life, especially now that Kenzie is part of it. I must say that their trip is not already well appreciated by their entourages. Because of that, they need to keep a low profile for the moment. Yet his plans will be completely messed up when he discovers that Kierran went looking for a way to save the beautiful summer exiled fae who is now fading. However, Ethan and Kenzie find themselves thrust into this world again while they hoped both to avoid it. Now they’re in search of a young boy who is himself looking for a cure. But his quest will lead Kierran to act as ever and threaten the lives of everyone. Yet he has no interest in the plight of others until he gets what he wants.

Ethan and Kenzie are really cute together even if our heart breaks at the thought that Kenzie is as always very sick. I’m surprised and quite pleasantly to see that Ethan wouldn’t seek for now to try to make a pact with the fae for a treatment. He understands the reason he needs to stay away of that but sometimes it’s also really difficult. In terms of Kierran, it is quite the opposite. I was quite surprised to see his naivety and stupidity. He is supposed to be a prince and at least think before he acts, but it is in no way the case and that’s a shame. Because his actions have serious consequences and I confess that even the most stupid person would have understood that there is a problem in all of this. We’ll see what happens later but I do not think that side of his personality will really work out. However, this does not spoil the story and I was really curious to see how everything would be solved and if Kierran would manage to save his beloved. Despite some passages a little long I have to say that I took great pleasure to follow their adventures here and I was even more happy to see Meghan and read some of her scenes. We also discover many new aspects of faerie as well as some means of survival and hopefully we’ll know more next time.

So it was a good book and I’m curious to read more, especially with such a purpose. Many things happen here and I’m sure you will enjoy this new novel.