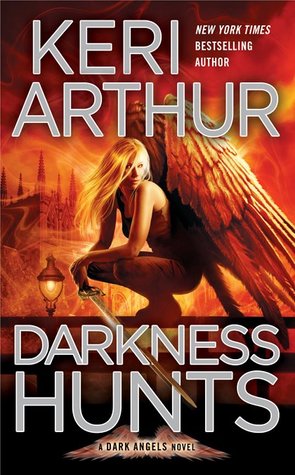 Synopsis: Risa Jones, half-Aedh/half-werewolf, can enter the realm between life and death. She can speak to the dying and the dead, and she can see the Reapers, collectors of souls. What she can not yet see is the identity of a stranger murdering women and draining their blood. Now Risa must summon her gifts to find him, even if it means putting her own life in danger. But Risa needn’t look far. The killer knows who she is.

He tells her his victims are infected by darkness and he’s fated to destroy them. Fascinated by Risa, he engages her in a sinister game: the chance to save the life of his next victim by deciphering his series of clues. In a race against time, she enlists the help of the Reaper Azriel.

But as an attraction between them grows, so does the fear that the stranger’s motives are only part of a larger, more dangerous scheme—one that has lured Risa and Azriel into the dark.

Review: I really enjoy this series and I was excited to read a new volume featuring Risa Jones. I must say that her quest about the keys is always very intriguing and I was curious to see how everything would progress.

So as always Risa continues her mission somehow, and especially in a bad way if I can say. Between her father, who has not an ounce of patience and her enemies who do not hesitate to change our heroine to make her serve their projects, the young woman must manage a large number of things. But this is not everything and while visiting the astral plane in search of answers, she finds herself embarked on a whole new story. Attending a strange murder, Risa has no other choice but to participate to rescue the young woman when the assassin propels her in his world. But with that she could herself become the prey at the same time. Something she would rather avoid especially given her disastrous life.

I loved the plot and I was curious to understand what the killer wanted from the young women he targeted and especially who was this faceless person presented to us. But of course, we also have an evolution about the main plots of the story even if they are minimal. But there is also much more and the relationship between Risa / Lucian / Azriel is also changing and I admit that this is one of the things that I really wanted to see. As Risa and Azriel are getting closer more and more while trying to keep distance as well, she moves away from Lucian while understanding the truth about him. I confess that I ‘m not really surprised, and I ‘m glad to see how everything was made.

This is again a very good novel and I think that each volume is always as good as the previous one. Then it was also a great surprise to see all the characters of the first series, whether Riley, Quinn, or even the staff of the Executive Board. And as always I am very eager to read more now.