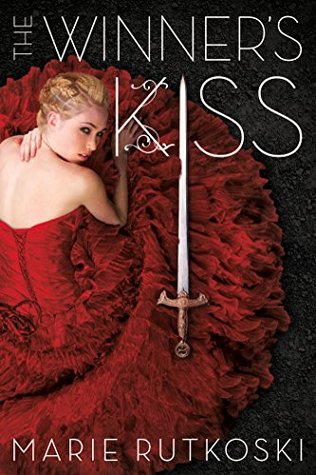 Synopsis : War has begun. Arin is in the thick of it, with the East as his ally and the empire as his enemy. He’s finally managed to dismiss the memory of Kestrel, even if he can’t quite forget her. Kestrel turned into someone he could no longer recognize: someone who cared more for the empire than for the lives of innocent people-and certainly more than she cared for him. At least, that’s what he thinks.

Review: How not to be eager to get into this third and final volume of The Winner’s Trilogy! Each volume was mastered admirably and the tumult of feelings due to the previous novel could only make us extremely curious to read it. Yes, our poor heroes went through so many difficult events and we wonder what is going to happen again. Of course, we also have the challenge of the last volume that is always very difficult to overcome, the ability to introduce a novel and especially an end to the height of what has been written before and I can tell you that Marie Rutkoski perfectly succeeded in her challenge and more than that because she takes us into her story from the first chapter and carries us along without being able to put it down. Yes, because once again the feelings are waiting for you, some very difficult indeed to the point of having tears in the eyes but also some more endearing when Arin and Kestrel are trying to rediscover each other. But you need to know one thing, it’s not an easy story, like The Winner’s Crime, the main characters are far from being well handled.

From the beginning, we discover the consequences of the Kestrel’s actions, what her father dared to do when he learned the truth about her and even if it is not death, I wonder if it is not worst. It was also very sad to see this young woman full of aggressiveness and willingness fading away despite her attempts, even to the point of not knowing who she is. It is a descent into hell that we follow but then also a hope to understand who she is and who she was. Although her strong character dominates, it broke my heart to see the person she had become after all these events. Yet we can only be happy to find Arin and to see him understand what he did and the consequences of his actions, to see that nothing is what it looked like….

But war is also raging and we see the choices of our heroes, the sacrifices they are willing to undertake to have victory on their side but again nothing is really simple. Yet, I found that the author had managed to perfectly recreate the consequences. Kestrel will also find herself in new situation, a role she did not really want and yet that will also help her to advance.

You can understand that I was carried away once more by the story and the characters. It is a real pleasure to meet them and read them. Marie Rutkoski moves us with their joys, sorrows and hopes. It’s not an easy story, but it’s something really exciting!

23 thoughts on “The Winner’s Kiss by Marie Rutkoski”