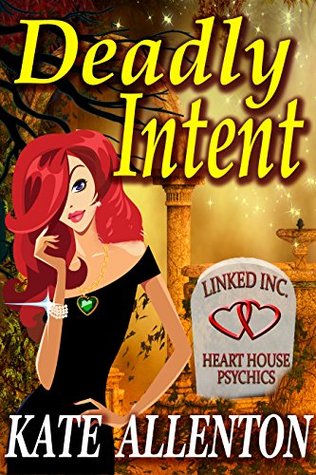 Synopsis: Psychic medium Quinn Thatcher would never be classified as normal. Just ask her mother. Her people-pleasing skills could use some work, which is why Quinn prefers working with the dead over the living. Ghosts take her as she is, but when people experience Quinn’s sharp tongue and sassy attitude, there is no in between. They either love her or want to throw her off the nearest bridge, with the latter being more typical. Good thing she knows how to swim.

When a Scottish ghost invades her home and insists she resolve his earthly issues, banishing his ghostly presence becomes priority number one, and a battle of wills and wits ensues until she ultimately agrees.

Her task is easy enough. Return a gem to its rightful owner and then return home, minus the aggravating ghost. Quinn should know things are never as easy as they seem.

Scottish laird Collin Menzie has lived through his share of problems and is still currently dealing with the aftermath of a fire that nearly destroyed his ancestral home. When a beautiful American shows up to return his emerald, her presence starts an unavoidable collision course, in which he questions not only his destiny but also hers.

When dealing with an annoying ghost, an emerald worth a small fortune, and a sexy-as-hell Highlander, what could possibly go wrong? Quinn is about to find out just how deadly the combination can be.

Review: This is a novel that promised to be nice! It must be said that it is difficult to resist Highlander, ghosts and a medium mixed with all this, right?

Quinn Thatcher and her sisters have some extraordinary gifts and seeing ghosts is her job. But now, this lucrative work also brings its share of problems when the ghosts decide that she has to help them, whether she agrees or not. The last one is also determined and he wants Quinn to bring back a family jewel to his home in Scotland. Although she resists initially, she finds herself making the trip where she will have to face real highlanders. Which one is a very sexy man. Yet she will also find herself in a curse story of which she is the main character.

I had a good time with this novel. It is quite short but it was very nice to discover Quinn and Collin. They are attracted to each other but do not really know how to handle it. When it seems that someone has it after Quinn, they will have to try to understand what is happening.

As I said, it’s a light and nice novel. We can read it quite quickly and the setting is very nice I must say too! The other novels in the series are about Quinn’s sisters and I’m curious to discover their stories too!