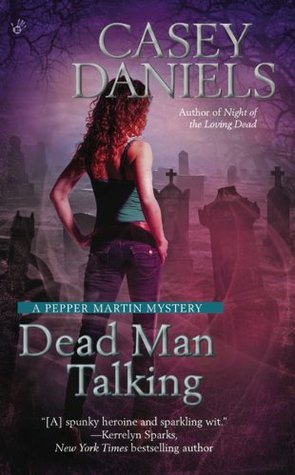 Synopsis: Move over American Idol. Reality TV has come to Cleveland and Pepper Martin is a part of it!

When Pepper arrives at a down-on-its-luck cemetery to help with a restoration project she learns, to her dismay, that there’s going to be a contest to restore the cemetery grounds. Even worse—it’s going to be the basis of a local reality TV show, Cemetery Survivor. One team will be made up of genteel Historical Society ladies and the other—Pepper’s group—will be convicts on probation. Pepper Martin in day-glo? Now that’s a fashion don’t!.

There’s also a ghost waiting for Pepper. He claims he was wrongly convicted of killing a young woman. But it seems there’s quite a bit he’s not revealing. Pepper agrees to try to clear his name, but digging for the truth could put her in grave danger….

Review: These novels are like little treats, when you start one, it’s hard to stop! I read them the ones after the others and hop the series is moving fast. I’ll be sad when I’m on track because this means I’ll have to wait for more! It will be a sad day, I tell you!

We find our heroine on a new case and it could be much more dangerous than the previous ones. Indeed, a former prison guard comes to ask her for help. Not to ask her to solve his murder, oh no, he died of a heart attack, but rather to clear his name. He was accused of killing his assistant in the 80s and he swears that he did nothing, despite everything that incriminates him. However, there are also many things he does not say and Pepper will have to discover all his secrets by herself while rubbing shoulders with old thugs. It’s already a lot, right? In addition to that, our heroine is hired to lead a team on a reality show to rehabilitate a cemetery. What she did not know is that if she is opposed to a group of rich old ladies while her group is composed of criminals on probation and their characters are colorful!

I really had a great time with the novel. The survey was interesting and I did not expect some of the reversals of situations that were a real surprise and were sometimes even a little sad. And how to resist this group of criminals who finally creates a small family even if they are sometimes a little disturbed. I loved all the discoveries and I do not know if we will have a chance to see them again but I would love anyway! And then of course, there is Quinn. Ah Quinn … it could not be otherwise, but still …

In any case and as always I can not wait to dive into the sequel now!