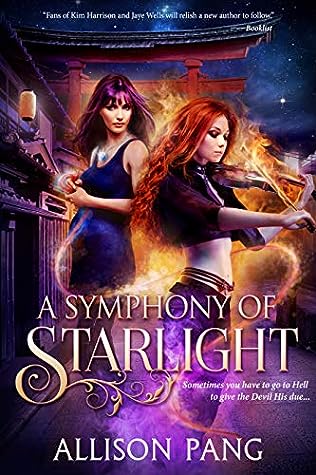 Synopsis: The road to Hell is paved with good intentions . . . and sometimes unicorn puke.

In the span of a few months, mortal TouchStone Abby Sinclair has been trapped in a painting, had her memories stolen, and been Tithed to Hell, killed, and brought back to life by the OtherFolk. Now she’s pregnant and torn between her incubus lover, Brystion, and her elven king of a husband, Talivar. Otherworldly love triangles notwithstanding, she’s more than content to set the political drama of magic and mayhem aside and quietly settle into motherhood. But nothing is ever that easy…

Years ago, Abby’s best friend, Melanie St. James, virtuoso violinist and DoorMaker to the CrossRoads, lost her soul to the Devil in return for an enchanted violin. Now the magic of her violin is fading, and the Devil is calling in her debt to serve Him as His TouchStone. In an effort to escape the terms of this reckless bargain, she flees to the CrossRoads with her lover, Nobu.

But reneging on a deal with the Devil isn’t the wisest of moves, especially when He knows Abby is the only one who can bring Him what He wants. And when tragedy strikes, it’s up to Abby and her friends to find a way to stop the violin from consuming Melanie’s soul before it’s too late, even if the journey takes them straight into Hell itself.

Review: Here is a series that I had a good memory of and if the last volume was released in 2012, the author has taken it back to offer us a brand new volume. A lot of time has passed and I have to say that I had almost forgotten the whole story. I think the best thing to do is to reread the first volumes to be well in the bath.

I had forgotten at the beginning of the novel how the present the love triangle was and it’s evolving at a higher stage here, so as I know it’s complicated for some readers, you’ve been warned.

Abby’s pregnant and she has to deal with two lovers on top of that: Brystion and Talivar. It’s not an easy situation, but on top of that, Nobu is back and Melanie is in serious trouble with her violin and her powers. So if our heroine was hoping to get some rest, she will be served!

It was very nice to be back in the universe and the characters and I had a good time with this tome. A good discovery again.

8 thoughts on “A Symphony of Starlight by Allison Pang”