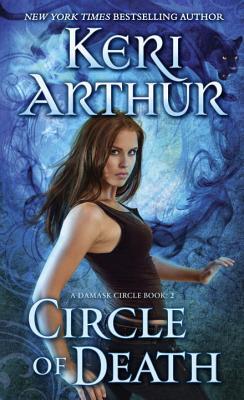 In one vicious night, Kirby Brown’s world is torn apart. Her best friend is dead, killed by a madman who is now after Kirby, and she has no idea why. When the police prove incapable of protecting Kirby, she has no choice but to trust a mysterious stranger. And while she finds herself inexplicably drawn to him, she fears the strange abilities he wields.

An investigator for the Damask Circle, Doyle Fitzgerald, has come to Melbourne, Australia, to hunt down a killer. What he doesn’t expect to find is a cadre of witches capable of controlling the elements, a sorceress determined to take that power for herself, and a broken woman who is more than she seems. Doyle is certain that the reason behind the bloodshed lies in Kirby’s past—a past she has no wish to remember. Because Doyle isn’t the only one with magic in his soul: Kirby’s special gifts have the strength to destroy the world.

Review: And here is the second volume in the Damask Circle series and after a first couple, here we are with Doyle and Kirby. And as for the first novel, Doyle is a full member of the Circle, while Kirby is a young woman with powers she does not really control.

As stated in the synopsis, it only took one night for the Kirby’s life to be turned completely upside down. And when she goes home, delayed, she discovers the body of her best friend… murdered. Therefore, her life will change completely as it now seems that someone is after her, and whatever she does, she does not understand the reason. But as she tries to save her skin, she is rescued by the charming Doyle. Handsome maybe yes, but she is very far from trusting him, especially after what she is going through, and the fact that he saved her life twice does not change that. And while the culprit is getting closer, Kirby will have to make a choice and find out what lurks in her past before it catches her up. But for this, one thing is sure, she will be forced to team up with this man she knows nothing about and who makes her feel quite contradictory things.

I loved to follow these two characters. It’s true, it was still the insta-love but it’s not really a problem because we suspect that quite early in the story. However, it will take some time for Kirby to trust Doyle and this is also why she refuses to get carried away by her attraction despite the attempts of the latter. I loved seeing her strength and her stubbornness to truly understand how she feels before undertaking anything. But she is much more and it is also a strong woman that we learn to discover and yet she hides many secrets and we discover them with her through the chapters. They will help her to understand who she really is. Because indeed, Kirby changes dramatically in the novel even though her stubbornness stays the same. She does not flatten before Doyle, which is a feat in itself elsewhere. Regarding this shapeshifter, I must say that he is quite controlling and does not like to be disobeyed, though the young woman seems unwilling to listen. Thus, we have some pretty colorful situations. But of course we have some more characters and I admit that the plot surprised me a lot and I had many revelations throughout the story. I must particularly emphasize that I did not expect at all such explanations from the past of the young woman and everything was really well found.

This novel is once again a pleasant surprise and I’m curious to find out who will be put forward in the last novel.

5 thoughts on “Circle of Death by Keri Arthur”