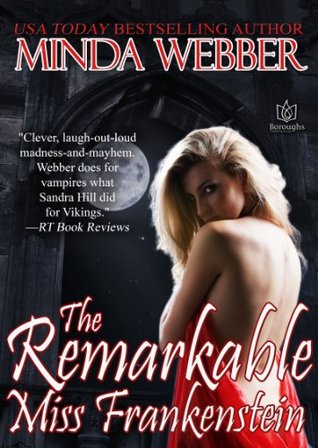 Synopsis: The problem, Clair realized, was her family name. Her uncle’s fame—he’d created her cousin Frederick from a bunch of spare parts – was a grave matter. Everyone in the family was a success, while all she’d managed was a humiliating misadventure with pigs.

But her spirits were rising.
The Journal of Scientific Discovery was promising to publish a paper on the Discovery of the Decade, and she had a doozy. She simply had to prove Baron Huntsley—man of distinction, man of renown, man about ton – was a vampire. With his midnight-black hair, soul-piercing eyes and shiny white teeth, what else could he be? Oh, yes, the baron wanted a bite of her or she was no scientist. And then there were all those other monsters. You’d never expect so many in 1828 London! Pretty soon she’d expose them all, and on everybody’s lips would be…THE REMARKABLE MISS FRANKENSTEIN.

Review: It really took me a while to read this one. Maybe I wasn’t in the right mood for such a book at the moment, I don’t know, but fact is that I really had troubles getting in, so much that I had to make a break with another book at some point before giving it another go.

In the end, it was an okay-ish read. But it was nothing like what I was expecting. It sounded like a historical paranormal story, with science references. I love historical settings, and I have always been fascinated by science, so despite not being too fond of werewolves and vampires, this book definitely sounded promising to me. Yet I have been really disappointed by the science part. Our protagonist, Clair, is supposed to be a brilliant scientist trying to demonstrate the existence of supernatural creatures like vampires and werewolves. So, I was expecting real science, with lab experiments and such, but I found nothing of that at all. Because guess what Clair’s “scientific” method is: she’s stalking people she suspects to be supernatural creatures in the hope to catch them turning into wolves or drinking blood. It rather looks like the methods of a bored lady looking for new topics to gossip about than like the methods of a real scientist to me.

Also, in a paranormal book I expect a few good action scenes. I didn’t find them here. Well, at some point toward the end of the book the heroin found herself in a in a mess and there could have been some good suspense, yet she got saved before I could start worrying for her, so it didn’t work. Other than this, the whole book mostly focused on Clair’s so-called scientific theories, and on the romance. Which leads me to the next criticism: I didn’t like the romance.

First, there is a bit of a love triangle, but this isn’t what bothered me the most since it is a minor thing. My main problem was with the love interest, Ian. At first Clair was suspecting him of being a vampire, and he caught her stalking him in the middle of the night. And suddenly he was all over her – why, I didn’t understand. I might have missed something, but the start of their story didn’t sound very credible to me. Also, he really was annoying with constantly reminding us how beautiful Clair was. Seriously, either he has never seen a woman before, or he is a breast fetishist, because he couldn’t stop rambling about how much Clair’s curves drove him crazy. He sounded like a teenager seeing a woman for the first time, it was ridiculous.

Oh, and the final twist about him was so obvious, I had guessed it since the first chapter.

Well, I’ve only brought negative points so far but it wasn’t that bad overall. When I finally got into the story, I did have a rather good time reading it, and it gave me a couple of good laughs, because the characters are so ridiculous, and many of the dialogs are. In fact, it sounded like a parody of a paranormal romance story. I don’t know if this was what the author intended to do, but if it was, then she succeeded.

I recommend this book to you if: you want a fun and light read.

19 thoughts on “The Remarkable Miss Frankenstein by Minda Webber”