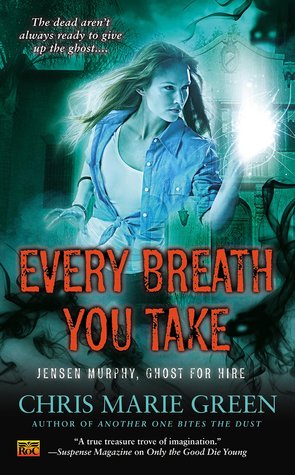 Synopsis: Ever wonder what happens after you die? Well, as a ghost, Jensen Murphy could tell you—and the truth is much stranger than anything you could imagine…

I never accomplished much when I was alive. As an average eighties California beach bum, I, Jensen Murphy, didn’t have any direction. But since I’ve joined Boo World, I’ve found a calling. Now, I’m a supernatural investigator, using my ghostly skills to spook confessions out of bad guys.

But being a paranormal PI is taking its toll. Spirits are hounding me for justice day and night, and, now, a ghost hunting TV show is digging up dirt on my unsavory demise that I’d rather keep buried. Worst of all, a seriously evil specter is making my afterlife hell by hurting the people and ghosts I care about. To stop him, I’ll need assistance from a higher power—only the price I’ll have to pay for that help could be my very soul…

Review: I enjoyed the first two volumes of the series and I find it really interesting that the author has chosen to take a ghost as a main character. This is not necessarily an easy thing to do because the interactions with others are very different in the end, but I think that Chris Marie Green had some very good ideas for Jensen and I had once again a great time with this third volume!

We pick up the story where we left it with a new investigation ultimately ending up with the confession of the murderer. Yet, our heroes are still weak from the last meeting they had with the Jensen’s murderer. In this novel, unlike the other two, we do not really follow a new investigation, no, not at all, but we learn more about our heroine. Indeed, a ghost hunter crew strangely decides to focus on the Jensen’s case. This is where Amanda Lee comes in to try to divert their attention, not to victimize our heroine again. But that’s not all because, surprisingly, this volume will reveal many things and answer all the questions we were waiting for. What a pleasure to finally understand who fake Dean is, this boy who seems so interested in Jensen. I admit that I was not expecting it at all and the author really surprised me with all her revelations about him. I think that we can not even imagine for a second about his identity. There was also ultimately a choice made in relation to Gavin and I think that all this happens for the best. It’s hard to really know that Jensen should do with him, because their story is actually not really easy either, although they could also make it work between them.

And then of course, we will also learn more about the murderer of our heroine. Again it is true that we might have an idea of ​​the culprit without really knowing who he was and I was again very surprised to learn the truth about him. I therefore confirm that the author has perfectly managed to lead us by the nose to surprise us with her startling revelations!

So yes, the author presents us all what we were waiting for since the beginning here and I was really pleased with the whole story. Once again I was carried away by it all and I loved spending time with the characters and the plot. I recommend you to discover the series, which is really nice to read! A wonderful conclusion.

34 thoughts on “Every Breath You Take by Chris Marie Green”