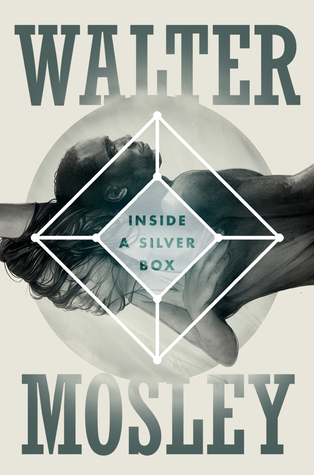 Synopsis: Walter Mosley’s talent knows no bounds. Inside a Silver Box continues to explore the cosmic questions entertainingly discussed in his Crosstown to Oblivion. From life’s meaning to the nature of good and evil, Mosley takes readers on a speculative journey beyond reality.

In Inside a Silver Box, two people brought together by a horrific act are united in a common cause by the powers of the Silver Box. The two join to protect humanity from destruction by an alien race, the Laz, hell-bent on regaining control over the Silver Box, the most destructive and powerful tool in the universe. The Silver Box will stop at nothing to prevent its former master from returning to being, even if it means finishing the earth itself.

Review: Have you ever finished a book not knowing if you liked it or not? That’s what just happened to me with Inside a silver box. And believe me, it’s a weird feeling. I think I enjoyed reading it, but I’m not sure I understood the story.

Let’s begin with the beginning. Ronnie Bottoms is a street thug. He has done countless two-ways trips to prison. One morning, he tries to rape Lorraine Fell, a rich, beautiful and intelligent college girl, while she’s doing her morning run. She struggles, and he kills her. But the place where he buries her body is the exact emplacement of the Silver Box, an alien entity that’s been buried there for years. Thanks to the Silver Box’s powers, Lorraine can persuade her murderer to resurrect her, and the newly formed pair is given a mission: prevent an alien race from taking over Earth.

With such a plot I was imagining a Doctor Who like story – after all, an alien race that wants to take over Earth, doesn’t it sound exactly like any Doctor Who episode? And indeed, the beginning made me think of this series a bit. But pretty quickly the story started to drag out. Seriously, if you’re expecting a cool story about badass characters fighting aliens to save the planet, go find another book. This one is more philosophical than action packed. Not that it is a bad thing, but in fact I didn’t quite understand what this book was about.

The cast of characters is pretty interesting though, as they are completely opposite. Ronnie is a young black man who comes from a poor family, hasn’t received any education and made stealing and street fighting his way of life. As for Lorraine, she’s the archetype of the perfect girl: beautiful, intelligent and wealthy. It could be totally cliché but the author escaped that and managed to make something really interesting out of these cliché characters: when Ronnie resurrects Lorraine, their personalities get mixed, and they both gain some traits from the other.

And from then on most of the book is dedicated to Ronnie and Lorraine exploring these new traits of their personalities, and the connection the resurrecting experience formed between them. Overall I did find it interesting – I especially liked Ronnie’s change, because it is the most visible, and he really stands back over his own past behavior. Lorraine does change too, she takes some of Ronnie’s hunger for everything, but I must say I didn’t understand most of her reactions throughout the book so I didn’t care much about her.

Yet as I said, at some point it really stated to drag out. Ronnie and Lorraine have been given the mission to save the Earth from an alien invasion, which could happen anytime according to the Silver Box, but they are spending their whole time trying to figure out their personality changes, visiting people from their past… well, their experience does raise some interesting questions, but there are aliens out there that they are supposed to fight!! I was expecting to read a sci-fi book, not a book about the meaning of life! The confrontation with the alien ends up happening in the very last chapter, and it is over as soon as it starts. All that fuss for what?

Anyway, from what I read on Goodreads, it seems that Inside a silver box definitely isn’t Walter Mosley’s best book as it disappointed several of his fans. I might give his other books a chance, as I liked his writing style and there were some good ideas in this book.

I recommend this book to you if: I don’t know who to recommend it to so I’d say go for it if you’d like to make your own opinion. But keep in mind that it isn’t really a book about aliens.

11 thoughts on “Inside a Silver Box by Walter Mosley”