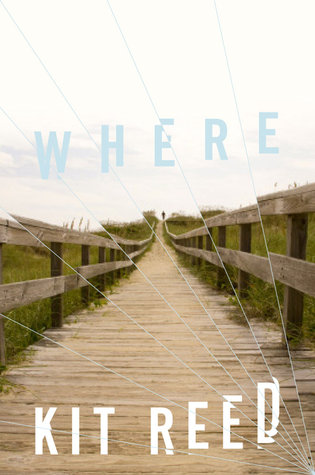 Synopsis: In a coastal town on the Outer Carolina Banks, David Ribault and Merrill Poulnot are trying to revive their stale relationship and commit to marriage, and a slick developer claiming to be related to a historic town hero, Rawson Steele, has come to town and is buying up property. Steele makes a romantic advance on Merrill and an unusual 5 a.m appointment outside of town with David. But Steele is a no-show, and at the time of the appointment everyone in the town disappears, removed entirely from our space and time to a featureless isolated village–including Merrill and her young son. David searches desperately but all seems lost for Steele is in the other village with Merrill.

Review: The first thing that I can say about this novel is its unusual appearance. Indeed, if we focuse on the spine of the volume, we can see different lengths of the pages, giving a very pretty appearance to the novel. I confess that this kind of esthetic change is always a point that attracts me a lot even if it does not really do anything with the story. Besides, let’s talk a little more about that… I’m always quite intrigued by small town stories and the disappearance of all the people, even though it is a fairly common theme, is always really interesting.

We follow several characters alternately here without it being too consistent. Either we really have three different characters but two are truly and primarily emphasized. David is the companion of Merrill but since the arrival of a stranger in the city, Steele, his relationship with his half is not really rosy. Wanting to settle the case during an appointment, David joins the man to explain himself, but Steele never shows up and when our hero decides to go home, he realizes that all the inhabitants of the city ​​have disappeared. But our man is determined to find his beloved and to understand what happened at all costs.

Alternatively, therefore we follow Merrill and through her, the inhabitants of the city. They find themselves in a strange place that no one understands the location or the purpose. Highlighting the fears of the population, everyone reacts rather violently but our heroine is determined to take it all calmly. Trying to do the best with respect to her son Ned (the third point of view that we can follow from time to time), Merrill will try to find a way to save him from her father and to find a way out from this unpredictable location.

The story is quite intriguing and I admit that I was curious to see what exactly this disappearance and mysterious village were. So I waited impatiently for the end but I think I was disappointed by the lack of answers we receive. There is also no real action here as it is mainly tracking the feelings of the characters in the changes they undergo. So it’s true that at the end of history I’m a little confused and I would have liked to understand a little more overall. But that does not change the fact that the story is very intriguing and we remain curious throughout the chapters. A different book.

28 thoughts on “Where by Kit Reed”