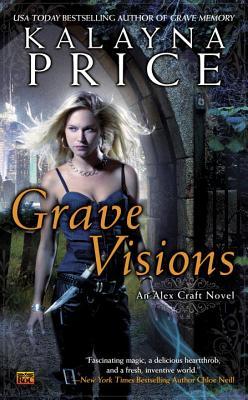 Synopsis: If you want to hear voices from the dead in Nekros City, you call Alex Craft. She’s a Grave Witch with reasonable rates and extraordinary powers, who specializes in revealing the secrets of the dead. But now she’s the one fighting to keep her own secret. She’s not human—and her newly discovered heritage is causing havoc for her both in the human realm and in Faerie. But her status as an unaffiliated fae also makes her an ideal candidate to investigate a new street drug that has surfaced in several of the spaces between the human and fae worlds.

This glamour-infused drug causes hallucinations that turn real—at least for a while and often with deadly consequences. Searching for the source of this drug—and its purpose—lands Alex front and center in the conflict brewing in Faerie and she must find answers before she’s dragged so deep she loses her freedom.

Review: It’s been a long time since I was expecting the release of this novel, and I must say that the wait was rather complicated when you consider that the date has been postponed several times. But there it is and this fourth volume is definitely there for our pleasure! And I can tell you that once again the author manages to draw us into her world and to keep us in suspense throughout the chapters! She presents, in fact, a volume to the height of the previous ones and we greatly enjoy reading it!

I was impatient to see Alex Craft and her world and even if I did not remember all the details of the series, it was very nice to see all the characters. I must say that our beloved heroine is found once again at the center of many problems! Without really desiring it, Alex finds herself in a much more terrible and complicated story than she would have hoped. Indeed, a new drug has been raging in the city, featuring nightmares becoming reality and killing the persons who are ingesting the substance. This is a rather difficult history, especially when the faes are related to that. In addition to this, our witch is also involved in an investigation for the Winter Queen and solving it could allow her to be free while waiting to choose which court wishes to turn to. Something else? Yes, because it is not finished! New characters enter the scene, wanting Alex as she is as always an asset of choice and it is true that we’re still looking forward to her decisions in relation to this. Because of that, she goes through difficult times and weigh the consequences of all her actions.

In terms of the resolution of the case, I confess that I suspected the culprit from the beginning but I still had a great time with the story, to see how our heroine was going to get by, especially with this sword of Damocles constantly above her head. Indeed, the investigation is really interesting and it was complicated enough to bind all the events taking place. It is in any case always very interesting to follow the tracks of Alex and see how she would solve it all. I was also curious to see what she would decide to do about her sentimental relationships even if everything gets even more complicated here. Yes, do not worry, Falin is there, as well as Death and nothing will be easy! In any case, after such an end, I’m really curious to see what will happen and what the consequences will be.

Finally, Kalayna Price takes us once again in her story, and I couldn’t put the novel down before finishing it! It’s always a pleasure to follow Alex and to learn about her adventures and I hope we will not have to wait as long for more because I am eager to read it. This is a very good series full of ideas and I recommend you to read it if you do not know it yet!