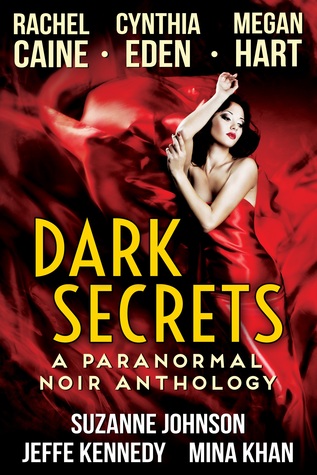 Synopsis: Six award-winning authors bring you this spellbinding collection of stories about dark desires, mysterious worlds, and danger that lurks in the shadows of the night. Where nothing is black and white; where things might not be as they seem; where magic and mayhem rule.

Valentine is a detective with two major problems: he’s been offered a kidnapping case that will probably get him killed, and his partner won’t let him turn it down. He owes her that much … since his partner’s a ghost, and he blames himself for her death. A dark, haunting noir mystery of love, hate and loss.

PI Mick Swayne has seen it all—his clients have included liars, thieves, and even killers. He thinks he can handle anything and anyone. Then she walks into his office. Savannah Moreau is beautiful, seductive, and…a vampire? The gorgeous vamp hires Mick to help her track down a killer who is hunting in Chicago, but as Mick slips deeper into Savannah’s paranormal world, he wonders if he can really trust his new client…

DANCE WITH THE DEVIL by Megan Hart

When the devil starts the music, you’d better get ready to dance.
Kathleen Murphy has sold her soul to the devil. Fame, fortune, success…everything she’s ever dreamed of is hers, and all she has to do is the devil’s bidding. When love comes knocking, the last thing in the world she wants to do is involve Jake in her twisted world, but the devil’s started up the jukebox and Kathleen has no choice but to learn the steps

THE CONSORT by Suzanne Johnson

Faulkner Hearne, the captain of the ruthless Fae Hunters, finds his duty at odds with his heart when he’s ordered to capture the consort of Faerie’s cruel Prince of Summer when she flees across the veil into modern New Orleans. Can Faulk turn Liandra over to a certain death at the hands of the prince, or will he risk a war with Faerie in order to save her?
An all-new novella set in the Sentinels of New Orleans multiverse.

A dark fairytale retelling of a princess robbed of rank, husband and even her name.
Nix is nothing. The Princess Natilde—her former waiting woman—attacked her on the journey to wed Prince Cavan, stripping her of everything and taking her place. With no serving skills, Nix becomes a goose girl. Perhaps if Nix keeps her promise never to reveal who she really is, Natilde won’t carry out her vile threats. Prince Cavan entered his arranged marriage determined to have a congenial, if not loving relationship with his future queen—for the sake of both their kingdoms. But, his wife repels him more each day and he finds himself absurdly drawn to the lovely Nix.

THE DJINN IN THE MIRROR by Mina Khan, a Djinn World novella

A paranormal Cinderella story with a young witch as the heroine and a wicked, sexy djinn instead of a fairy godmother.
Dahlia, the step-daughter of a power hungry wizard, promises to free a djinn trapped in a mirror if he rescues her from impending death. But Ashmael the djinn has his own agenda: to trick & seduce his way to freedom. The only problem is he ends up falling for Dahlia. Can he win his freedom and save the girl?

I’ve read some books by Rachel Caine I really enjoyed but it is true that it was interesting to find her with something a bit different. Here, we find Valentine, a detective wearied of his work after the death of his assistant. And even if the latter is always present in her spectral form to help him, that does not change his guilt. However he will be obliged to accept a case when the niece of the young woman disappears and that the family comes to see him to have his assistance. It was a rather interesting story and I always appreciate the presence of ghosts. However, I found that it drew a little bit in length towards the end.

I heard a lot about the writer without reading one of her books but this novella was a good occasion to get into in her universe. Once more, we find ourselves with private detectives whereas it enters in collision with the supernatural world. Indeed, a vampire comes to our dear detective to require his assistance in order to find the person in charge of two murders downtown by another vampire which she hopes to catch. However, Savannah also wishes other things, a companion and it is true that the two stories mix perfectly. I did not expect either to doubt about the culprit, but Cynthia Eden manages nevertheless to make us balance between the two characters and it is true that I found that it was very well done. A story making us want to discover more from the writer!

Dance with the Devil – Megan Hart

I do not remember if I have read a book by Megan Hart and yet her name rings in my head, perhaps another novella? In all the cases we find a very good little story here and I confess that I spent an excellent moment. No private detectives this time but rather a young woman who signs an agreement with the devil and who must accept all that he asks her for fear of lose her soul or to die. It is a difficult task with always many consequences. However it is rather complicated to understand Satan, to see how he plays with our heroine for finally giving her an end which we would not expect. Yes, I still have many questions but it was a very good novel and I would love to learn more! I also appreciated at the end, the small part which introduces Jake in another story

I think that everyone knows that I really appreciate the books by Suzanne Johnson, thus it was a pleasure to find a story in her universe, even more when the faes have the place of honor. Yes, because besides that, I have a big weakness for all that has connection with these creatures. We find a young girl finds become the consort against her will of a fae prince. To avoid that, she will try to flee but will be quickly caught by those who search for her and yet there could be a loop-hole. It was a very good story once more and it is a pleasure to return to the universe of the writer.

I had never read a book by Jeffe Kennedy but it is true that I always heard a lot of good things about her and my friend Carien always does many praises. I was therferefore impatient to start my reading! We find ourselves launched in a tale, a story which is not easy and I was very sad for the young Nix and all that she must go through whereas she really does not deserve it. It was a good story, a nice discovery and it is true that now, after a small outline, I am very curious to try something of more complete from the writer!

The Djinn in the Mirror – Mina Khan

Here is another writer that I do not think of having tried before but I acknowledge that her story really gave me desire to learn more! It should be said that, like the faes, the Djinn always really intrigue me and it was a pleasure to learn a little more about them and about their world. For that, we follow the story of a young girl who tries to release herself from the influence of her stepfather although that is really very difficult. However, she will be helped by her very particular cat and perhaps this new djinn if she is able to get him to understand that she is not her mistress but rather her equal. A pretty small discovery and I am curious again to read more!