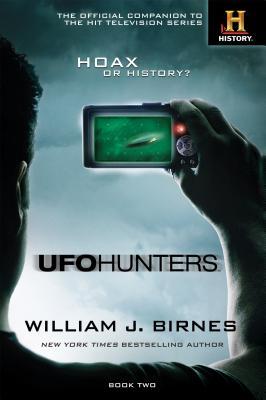 Synopsis: A young girl digs up a thousand-year-old humanoid skull from a cave in northern Mexico. But the skull contains no human DNA.

An amateur videographer taking footage of lights over Mount Shasta, California, captures a giant floating triangle on tape. It’s not a plane. It’s not a helicopter. What is it?

These questions and more are answered in UFO Hunters Book Two. Using eyewitness accounts and information from footage never before seen on television, author William Birnes takes readers on the hunt for the real truth about flying saucers, what they are, and why they’re here. This is the second companion to the popular HISTORY series and should delight fans in every way.

Roswell
I think everyone has heard at least once about Rosswell. I’m not one of those who followed closely the story, although it’s true that it’s still a very interesting topic. So when I saw that the first part of the novel was about the crash and all that had been said by the military and the people, I found it fascinating. They show that the first proposal for an explanation by the army is not possible although there have been several other discussions too and I admit that I asked myself questions. I think many things are possible and I hope that one day we really will have a clear answer on what happened in Rosswell because it’s a pretty amazing subject.

Invasion in Illinois
I do not think I know this story which is taking place in Illinois in 2004. Indeed, it appears that thousands of people witnessed lights in the sky, lights that lasted for 20 minutes and which reappeared in 2005. Many doubts persist around this story, but a lot of persons filmed the phenomenon and I confess that I searched on the internet to see what we were talking exactly about. This case brings less than the first one and is less impressive but it was also interesting to see certain assumptions and to understand that although some are implausible, we do not really have any ideas on what has really happened.

Giant Triangles
We consider this time the triangles of light that many people have seen around the world, in the United States, as in Belgium in the early 90. There are no doubts over these triangles, they were filmed but it remains to understand the cause. The author explains that this may not be a plane but a very advanced technology. The time travel is mentioned and I think I am a little doubtful in respect to this hypothesis … I can not quite believe it.

Arizona Lights
The lights seen in Arizona seem quite impressive. It seems here too that many people have seen what was going on and some also spot a flying object. Yes many saw it because in the evening. What is rather surprising about it is that the Air Force had no comments to give and would not tell a thing. Some say that it is a sign and that the only explanations seem impossible. An interesting event. But I wonder if it is not a technology which is precisely tested.

Alien Crashes
As for the title of this section, the focus this time is on the crash of disturbing objects. But witnesses are harder to find when we see that military or Special Forces were still present to retrieve what was left of the remains. Nobody really knows what crashed, satellites tips? A meteorite? Questions without answers, but one thing is certain everything was quickly recovered by the Forces who were normally carrying nuclear-related items.

Nazi UFO
There are many assumptions about the Nazis and their experiments. Here are the assumptions related to the Nazis and their most advanced inventions. Weapons some think impossible to achieve without outside help … Did they have the help of Aliens? Or at least their technology to achieve all this? I admit that I do not really believe it personally but it was interesting to see what people might think.

The lost files of UFO Professor James E. McDonald
I may be a little less attached to this story but I admit that when the first were really interesting, they follow now the same model even if it is not the same place or the same persons. Here we follow the McDonald’s story, a man, a doctor of physics who tried to understand what was going on but his ideas and what he said put him in a conspiracy. In any case that is what the author thinks and after his wife had left him he committed suicide. Yet it would seem that his notes are fairly accurate and well done too.

“UFO Monitoring” Brookhaven, Lawrence Livermore and The John Fort affair
This new story was interesting, a plot against a man who has embarked on UFO researches and who may have been a bit too interested to certain things. It is true that when the author explains it, we do not understand what could have happened to him so he ended up like that, but if everything is true for this man, it hurts to see how the system can backfire. As for the story itself, I admit that I am curious to see the video in question.

“The Greys Conspiracy” The Starchild and the late Lloyd Pye
This part focuses on the abduction by aliens, or the discovery of a possibly hybrid body. I admit I do not really believe that either, an abnormality of the body is still possible but as for the kidnappings, I do not know, for me there is no evidence that could corroborate everything.

“Underground Alien Bases” Dulce
I do not disagree with the fact that there may be secret bases of the United States Army, it definitely exists in many countries elsewhere where studies are carried out but even if genetics is a point that can be looking in, I do not think there are places where humans do experiments on aliens and vice versa in the same place. Experiments on humans or other animals seem more plausible to me.