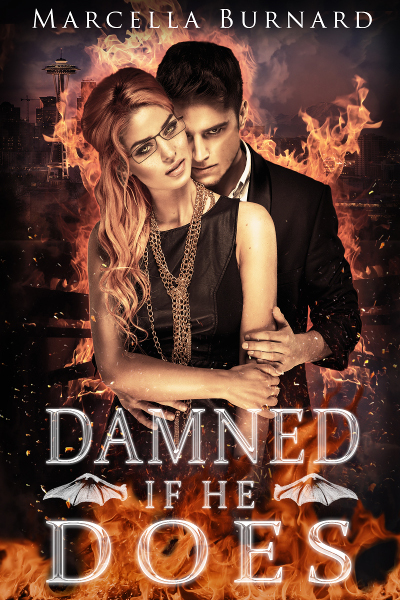 Synopsis: Rejected by heaven, twisted by hell, what’s a damned dead man to do when he stumbles upon a life and love worth fighting for?

Though damned for his earthly sins, Darsorin Incarri likes being an incubus. Prowling women’s dreams to siphon off their sexual energy for Satan’s consumption has its perks: an array of infernal power and a modicum of freedom. Sure, Ole Scratch holds Dar’s soul in thrall, and Dar has to spend a few hours recharging in Hell every day, but it could be much worse. All he has to do is hold up his end of his damnation contract – five women seduced, satisfied and siphoned per night for eternity. So when he encounters gorgeous, bright, and funny Fiona Renee, it’s business as usual. Deploy the infernal charm and rack up another score. Except it doesn’t work. She’s immune. He has to find out what’s gone wrong or face Lucifer’s wrath.

Fiona Renee has the life she’d always wanted: a career, a home, a cat with a bad attitude, and peace. Fiona’s dated. Had boyfriends. And hated every minute of it. She’s reconciled to being lonely. So when a man shows up in her bedroom in the middle of the night demanding to know why her dreams turn to nightmares every time he tries to seduce her from within them, Fiona winds up negotiating a contract with a demon that allows him access to her life. She never anticipated that it would also give him access to her heart. If she’s going to fall in love at all, something she never thought would happen, shouldn’t it be with someone who’s alive? If Fiona wants to hang on to Darsorin, she has to find his true name—the one he’d been given at his birth over a thousand years ago. But Satan, himself, stands in her way. Even if Fiona can dodge Lucifer, she and Darsorin have to face the question neither of them can answer: What happens to a dead man if you manage to wrest his soul from the Devil?

What did I think of it:
I love Marcella’s books, so when she asked me if I wanted to read and review her newest book Damned if He Does, a light Paranormal Romance I jumped at the chance.

And this is such a good read.

Fiona being who she is, this romance is all about emotional connection. I loved how the bond between her and Dar developed. The romantic story line is sweet, fun and heartwarming. I connected with Fiona from the start and rooted for her that everything would turn out ok. Dar is a cool character as well. He is a bit dense at times, but he goes through a lot of growth in this story.

The suspense story line is small, but fun. I loved how Satan was written and there was another demon I hope will get her own story. She came across as a character who has a very interesting story to tell.

Overall this is a very original and beautiful Paraonormal Romance. I can advice this to anyone who’s looking for a well written and sweet paranormal read.

Why should you read it:
It’s a heartwarming, fun Paranormal Romance

15 thoughts on “Damned If He Does by Marcella Burnard”