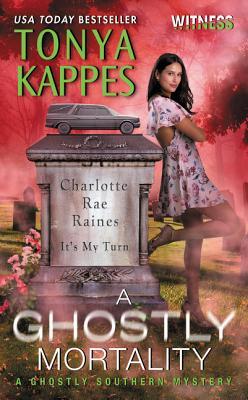 Synopsis: That ghost sure looks . . . familiar

Only a handful of people know that Emma Lee Raines, proprietor of a small-town Kentucky funeral home, is a “Betweener.” She helps ghosts stuck between here and the ever-after—murdered ghosts. Once Emma Lee gets them justice they can cross over to the great beyond.

But Emma Lee’s own sister refuses to believe in her special ability. In fact, the Raines sisters have barely gotten along since Charlotte Rae left the family business for the competition. After a doozy of an argument, Emma Lee is relieved to see Charlotte Rae back home to make nice. Until she realizes her usually snorting, sarcastic, family-ditching sister is a . . . ghost.

Charlotte Rae has no earthly idea who murdered her or why. With her heart in tatters, Emma Lee relies more than ever on her sexy beau, Sheriff Jack Henry Ross…because this time, catching a killer means the Raines sisters will have to make peace with each other first.

Review: I was really sad while finishing the previous volume and realizing that Charlotte Rae was killed. I know that she was a little annoying over Emma, but I liked their little fights and I’m sad to see that we won’t see them together again.

I had the chance to read the 5th and 6th book the one after the other but it’s true that I was a bit disturbed by the first chapter. Indeed, it is identical to the last of Volume 5 and I wondered for a moment if it was an error from the publisher. But no, the novel takes us back in history and we do make a small leap back in time. So we are back during the funeral wake of Jade Lee and we are launching in a new investigation to find the killer of Charlotte Rae.

I admit that I was fascinated by the story, trying to understand what had happened to the sister of our heroine. That’s sad to see how her family is devastated and to understand that solving this murder also means the complete disappearance of Charlotte. We had seen her a lot in the last novels but it is true that it was interesting to have a volume centered on her, getting to know her a little more and to see that despite the discord she and Emma love each other. It was also funny to see how Emma goes beyond the promises she made to Jack Henry and the hilarious situations in which she finds herself every time.

Yes you can see that I had a great time with this novel, even more than the previous one. This series is always nice, humorous, presenting a mystery that we always take pleasure to follow.

33 thoughts on “A Ghostly Mortality by Tonya Kappes”