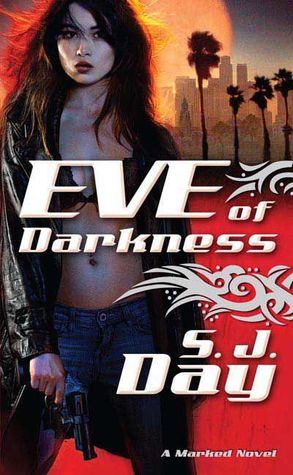 Synopsis: Cursed by God, hunted by demons, desired by Cain and Abel… All in a day’s work.

For Evangeline Hollis, a long ago fling with a bad boy from the wrong side of the tracks just became a disaster of biblical proportions. One night with a leather-clad man of mystery has led to a divine punishment: the Mark of Cain.

Thrust into a world where sinners are drafted into service to kill demons, Eve’s learning curve is short. A longtime agnostic, she begrudgingly maneuvers through a celestial bureaucracy where she is a valuable but ill-treated pawn. She’s also become the latest point of contention in the oldest case of sibling rivalry in history…

But she’ll worry about all that later. Right now she’s more concerned with learning to kill while staying alive. And saving the soul she’d never believed she had.

We discover Eve, a young woman whose life is marked by a man who followed her all her life and who abandoned her recently, a man who will also change her destiny. Captivating, dark, charming, Cain is everything of the classic bad boy but a difference makes him dangerous, he is the legendary Cain of the Bible, who was exiled on earth for his redemption by eliminating demons who sinned. But now, he could not resist Eve, the person he had to resist and although she could have a normal life, she finds herself now marked and changed like her former lover. She must now redeem a crime she did not commit with a man as a mentor she never stopped loving. Yet this alliance will not be easy, especially when everyone is after Cain and knows she is now his weakness. Thus they will launch in a race against time where Eve is determined to stay alive regardless the price and where she will be propelled into a world she does not know the rules and that could well be fatal for her.

I was surprised by the format of the story and especially the first chapter which directly announces the end before heading back to present us the basics and to introduce the characters and the universe. It was very interesting to discover the ideas of the author about it although I admit that I sometimes had a little trouble with the change of characters and place from one line to another without really understanding it. I had sometimes to read a sentence twice to understand that we had no more to do with what happened before. That aside, I found the mythology and the use of the religion fascinating and do not worry about the religion topic as it is very well staged. I’m curious to see what happens to Eve, especially in relation to the discovery of this new world but also in relation to her choice facing the two brother Abel and Cain who finally seems quite complicated.

Finally I had a good time with this first volume and I’m curious to get the next to have some new adventures of our dear Eve especially when we know the end of the first volume.