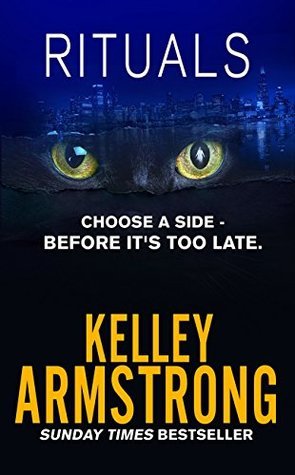 Synopsis: The fifth book and the exciting conclusion to bestselling author Kelley Armstrong’s “impossible-to-put-down” Cainsville series, in which she mixes hard-hitting crime writing with phenomenal world-building to create a brand of fiction all her own.

When Olivia Taylor-Jones found out she was not actually the adopted child of a privileged Chicago family but of a notorious pair of convicted serial killers, her life exploded. Running from the fall-out, she found a refuge in the secluded but oddly welcoming town of Cainsville, Illinois, but she couldn’t resist trying to dig out the truth about her birth parents’ crimes. She began working with Gabriel Walsh, a fiendishly successful criminal lawyer who also had links to the town; their investigation soon revealed Celtic mysteries at work in Cainsville, and also entangled Olivia in a tense love triangle with the calculating Gabriel and her charming biker boyfriend, Ricky. Worse, troubling visions revealed to Olivia that the three of them were reenacting an ancient drama pitting the elders of Cainsville against the mysterious Huntsmen with Olivia as the prize.

In the series’ fifth and final novel, not only does Gabriel’s drug addict mother, who he thought was dead, make a surprise reappearance, but Kelley Armstrong delivers a final scary and surprising knock-out twist. It turns out a third supernatural force has been at work all along, a dark and malevolent entity that has had its eye on Olivia since she was a baby and wants to win at any cost.

Review: I loved the other volumes of the series and I was impatient to be able to read this last volume to know how our heroes were going to get away with such a fate.

While Olivia tries to manage her separation from Ricky and her feelings for Gabriel, she must also be careful not to repeat the same mistakes as in her other lives. But if she had only that to manage… Here a woman pretending to be Seanna shows up in town and wants to see her son. While Gabriel has to face once more his past, Olivia will have to manage the new problems that accumulate. Indeed, a third force seems to be present from the beginning and is ready for anything to conquer her … and unlike the others, she is not interested in the choice of the young woman.

I really liked this last volume. We learn a lot about the characters’ past and what really happened with the parents of our heroine. She had fairly preconceived notions about her mother and father but it is true that we finally understand that nothing is necessarily black or white and that although they have both greatly participated in different ways to the murders, they also did it out of love.

The relationship between Olivia and the two men of her life is quite difficult because we wait at any time for it to slip. Moreover, the events are sometimes heart-breaking, but this time, each of the characters knows what to do.

You will understand that it is a very good conclusion for the series. It has not been easy, but all our heroes remained the same until the end!

32 thoughts on “Rituals by Kelley Armstrong”