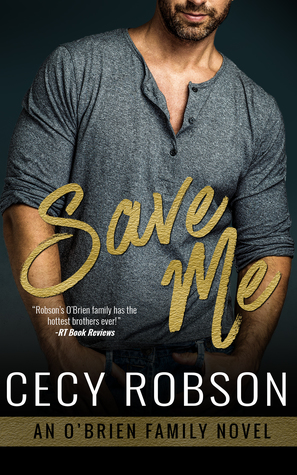 Synopsis: Three weddings. No date. What’s a hot stud to do when all the women on his speed dial are either serving dinner to their families or serving time?

Review: It’s finally Seamus’ turn to present his story and as for all the novels in the series, I was really looking forward to immerse myself in this new story! It must be said that Cecy Robson rarely disappoints!

We discover this O’Brien brother and Allie, two characters that everything seems to oppose! While all his siblings have found their half and are about to get married, the oldest of all seems irretrievably alone. But now, the marriage is approaching, he is spoiled and he is determined to prove to them that he can find a nice girl! For her part, Allie is a pretty lonely young woman and while her sister is the one who has everything “beautiful, intelligent, famous”, she seems to live in her shadow, while she doesn’t say a thing because “this is family”. But the marriage of her sister with her ex, an ex she thought to marry before is difficult for her. Therefore she sees an opportunity when Seamus agrees to make an agreement and passes for her boyfriend, if she wants to do the same for him!

I really liked this novel and I must say that I easily connected to Allie. She tries to do her best in her family and yet she is treated in an execrable way by her mother or even by her sister. I was happy to see her change, to gain confidence and finally to manage to say stop even if it’s not easy. Her meeting with Seamus will change everything. It must be said that he has everything for him! Yet he must overcome his past as well.

It was a great novel! As I said Cecy Robson always manages to get me into her stories and Save Me is a perfect example! I strongly advise you to try her series. They are all fantastic!

23 thoughts on “Blog Tour: Save Me by Cecy Robson – Giveway”