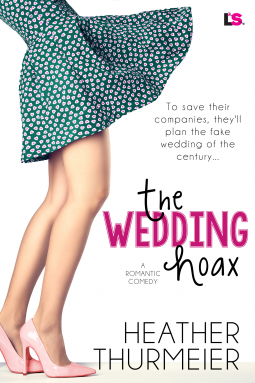 Synopsis: Meet the bride…
Wedding dress designer Daisy Willows always imagined marrying the man of her dreams. The fantasy did not include a fake engagement or a fake wedding. Or that her ex, Cole Benton, would be the groom. But as her mom’s medical bills pile up, Daisy can’t refuse the help of a well-known bridal show expo owner…or his plan for the fake wedding of the century.

Meet the groom…
Cole Benton’s bridal magazine is on the verge of capsizing, taking Cole’s dream of an outdoor lifestyle magazine with it. So Cole agrees to the publicity stunt and becomes “engaged” to Daisy. But despite their searing-hot chemistry—both in public and in private—not everyone is buying the charade. And now the only way to save their skins and prove that their big white wedding isn’t a big white lie is to say “I do…”

Review: I liked the idea of the synopsis and I thought that it would be fun to follow such a story. It does not revolutionize the genre, but it was pretty cool to read it.

Daisy broke away from Cole when she realized that they did not want the same thing in life. It was not easy, but she moved on. Yet here, her business, like Cole’s is about to sink and to straighten it, a deal is offered: to pretend to be engaged and make a false wedding while partnering with a salon owner expo. It will not be easy, everyone will not believe it, and yet they will do it and maybe even fall in love with each other.

It was a light reading, not very surprising but that allows to have a good time anyway.

17 thoughts on “The Wedding Hoax by Heather Thurmeier”