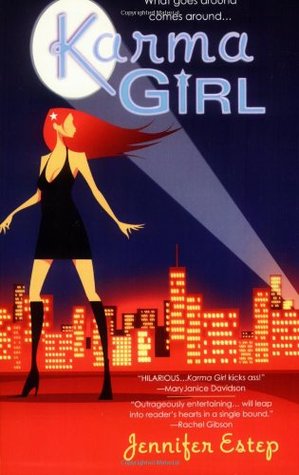 Synopsis: Bigtime, New York, is not big enough for both Carmen Cole and the superheroes and ubervillains who stalk its streets. An intrepid reporter, Carmen’s dedicated her life to unmasking the spandexwearers, all because her fiancé turned out to be a superhero, and a cheating one at that-sleeping with none other than his nubile nemesis.

Exposing the true identities of the nation’s caped crusaders and their archenemies has catapulted Carmen from her sleepy southern hometown to the front pages of the country’s biggest newspaper, The Exposé. Hobnobbing with millionaires and famished fashionistas is all in a day’s work for a woman on the trail of the Fearless Five and Terrible Triad. But when Carmen gets the scoop of her career, her life comes crashing down around her. And even Bigtime’s sexiest superhero, Striker, may not be able to save her.

Review: It’s been a long time since I’ve read a novel featuring superheroes and I admit that, knowing the talent of Jennifer Estep, I was curious to discover another of her series. I have this novel for years and it is true that I do not regret finally trying it because I had a good time.

Carmen Cole hates superheroes and their alter-egos the ubervillans. Why is that? On the day of her wedding and feeling that her fiancé hides something from her, she decides to go and ask him for explanations to find him cheating on her with her best friend … But that’s not all, because on top of that, he kept a secret that he was the superhero of the city and her best friend the villain of the story. Scorned and after revealing their identities, she decides to take revenge by unmasking all the heroes and villains so that everyone knows who they are! But now, by becoming more and more known and by unveiling the most appreciated heroes, her career plummets overnight when her latest victim commits suicide after the publication of the paper. Putting everything in question, Carmen will have to face new attentions and especially ubervillains who want her to discover the identity of the sexiest superhero: Striker.

I liked this novel, it’s fresh, it’s full of ideas and it changes from what we usually read everywhere. Carmen realizes little by little that her revenge can have terrible repercussions … Her relationship with Striker is a little delicate and we can see that neither of them really knows how to act in relation to the other. A link exists between them, which pushes them towards each other and yet both know that it is a bad idea.

The story was nice and I really had a good time with the characters. However it is true that there is not a lot of suspense regarding the identity of the characters. While Carmen is looking for who Striker might be, we are almost sure about his identity, just like the great villain of the story. It is not really a problem but I wondered if it was done on purpose or not. In any case it’s a different story to have a good time!