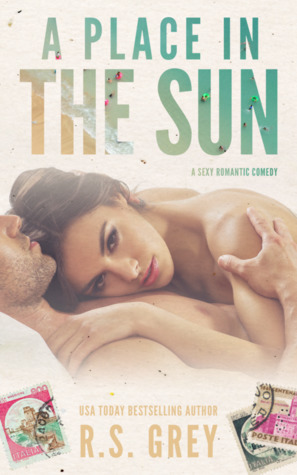 Synopsis: When her mother’s incessant matchmaking hits an all-time high, Georgie Archibald does what any sensible woman would do: she flees the country.

Seeking refuge in the picturesque seaside village of Vernazza, Italy, Georgie’s only plan is to lie low, gorge herself on gelato, and let the wine and waves wash her troubles away… that is until she wakes up in a bed that belongs to the most romantic-looking man she’s ever seen.

After going out of his way to rescue her, the former London financier turned mysterious recluse makes it clear that despite acting as her white knight, he has no plans to co-star in her fairytale.

But Georgie isn’t asking for his heart—she’s merely intrigued.

After all, Gianluca isn’t just gorgeous—tall and tan from days spent in the sun—his touch sets her world on fire. With him, Georgie experiences the most intoxicating passion she’s ever known, and it only takes a few steamy nights for her to realize that sometimes running away from trouble is the best way to find it.

Review: I did not know about R.S. Grey but after seeing some very positive reviews of her books, I was very curious to try one of them and it was finally the case with A place in the Sun!

I loved following Georgie in this story. Tired of participating in her mother’s meetings to find a husband, she decided overnight to leave for Italy and move away from all her maneuvers. But now, from the beginning it does not happen as expected when she is sick like hell in the train that brings her to her destination. But this is also what will allow her to meet Gianluca. Ah Gianluca and his abs! Yes, Georgie, we understand you and your trance in front of this man that every woman seems to dream of. But now, if Georgie is determined, it can be said that Gianluca is the most recalcitrant person she has ever met. After making him understand that she does not interest him, besides he does not care about her to the point of not remembering her name, Georgie begins to think that she is a desperate case. But our Georgie is determined, oh yes, very determined and she speaks a lot! Like a lot! And even Gianluca is forced to notice that she can become very annoying! Yet, whatever she does, our Italian is stuck in his past. His wife died a few years ago and he can not overcome that, moreover, he does not seem to want it. Despite this, and although I can understand it, I admit that I sometimes wanted to shake him and slap him. He does not realize the harm he is doing to the young woman and it is really very sad sometimes to see the consequences. But it’s Gianluca so in the end we forgive him.

Did I tell you that the story was happening in Italy? Near the beach? I can tell you that it really makes you want to go on a vacation and discover the landscapes. Yes but to go exactly where our characters are! And then there is plenty of wine too! I admit that I do not drink much but at the end of the book, we really want a glass of wine!

It was a really nice read and I am very curious to read other novels of the author now. I want to live with Gianluca in Italy. After that it is true that the base of the story has already been exploited in other novels but I really had a good time!