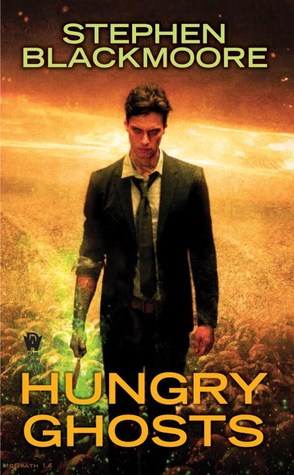 Synopsis: Necromancer Eric Carter’s problems keep getting bigger. Bad enough he’s the unwilling husband to the patron saint of death, Santa Muerte, but now her ex, the Aztec King of the dead, Mictlantecuhtli, has come back — and it turns out that Carter and he are swapping places. As Mictlantecuhtli breaks loose of his prison of jade, Carter is slowly turning to stone.

To make matters worse, both gods are trying to get Carter to assassinate the other. But only one of them can be telling him the truth and he can’t trust either one. Carter’s solution? Kill them both.

If he wants to get out of this situation with his soul intact, he’ll have to go to Mictlan, the Aztec land of the dead, and take down a couple of death gods while facing down the worst trials the place has to offer him: his own sins.

Review: This is the third volume of the series and I am glad to know that some new novels will come later! We find Eric Carter in the continuation of his adventures. Indeed, he is looking for Tabitha to try to understand exactly her role. It’s not easy and he does not know what he’ll do when he finds her. However, they will team up and they will go to land that few people have walked on. Because what is most important for Eric is to discover what he must do with these two gods.

I had a good time with this story, although I admit that this one is not necessarily as good as the other two. I do not know why but it is true that this volume is a little different in its construction. In the first two, even though Eric did not really know what to do, he had a line and goals. Here, however, it’s a little different. Indeed, he seems rather lost and he advances without really knowing what to do. But this is only a detail because it is always a real pleasure to follow our hero and the author will allow us to discover more about the universe and the mythology. He will also propose reversals of situations that I had not seen coming and I am very curious to see what will happen thereafter!