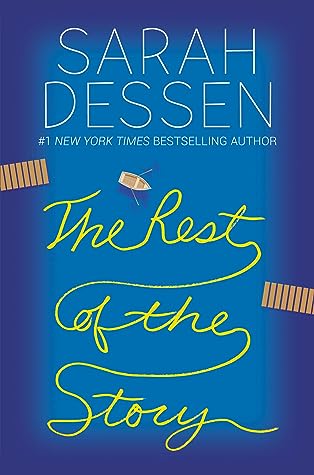 Synopsis: Emma Saylor doesn’t remember a lot about her mother, who died when she was ten. But she does remember the stories her mom told her about the big lake that went on forever, with cold, clear water and mossy trees at the edges.

Now it’s just Emma and her dad, and life is good, if a little predictable…until Emma is unexpectedly sent to spend the summer with her mother’s family—her grandmother and cousins she hasn’t seen since she was a little girl.

When Emma arrives at North Lake, she realizes there are actually two very different communities there. Her mother grew up in working class North Lake, while her dad spent summers in the wealthier Lake North resort. The more time Emma spends there, the more it starts to feel like she is divided into two people as well. To her father, she is Emma. But to her new family, she is Saylor, the name her mother always called her.

Then there’s Roo, the boy who was her very best friend when she was little. Roo holds the key to her family’s history, and slowly, he helps her put the pieces together about her past. It’s hard not to get caught up in the magic of North Lake—and Saylor finds herself falling under Roo’s spell as well.

For Saylor, it’s like a whole new world is opening up to her. But when it’s time to go back home, which side of her will win out?

Review: I really liked the few novels I read from Sarah Dessen. Also with the release of this new novel, I was very intrigued to discover the story and I must say that I once again had a great time with it!

Emma Saylor is a young girl who realizes that she has never known her mother’s family. It’s not that she didn’t want to, but she never really realized it. So when her father goes on his honeymoon and, by chance, that there is no longer anyone she can stay with, he offers her to go to the lake where her mother grew up. She remembers her mother’s beautiful stories, but she doesn’t know anyone. She only went there once when she was 4, but it’s so far away. Yet when she arrives, it is as if she has always been part of this family and this meeting will change her life. She will learn to discover who her mother was, that part she had never told her before and above all, she will become attached to this family.

It was a very nice novel. I really enjoyed seeing Emma evolve, discovering this other world, this family that she didn’t know and who welcomes her with open arms. She will give back what she had missed and above all these people will make a small place for themselves in her heart.

I really had a good time and although I would also have liked to learn more about what was going to happen next for her, it was a nice discovery. Each of the author’s novels makes me want to read more to discover what she will propose in her next story.

13 thoughts on “The Rest of the Story by Sarah Dessen”