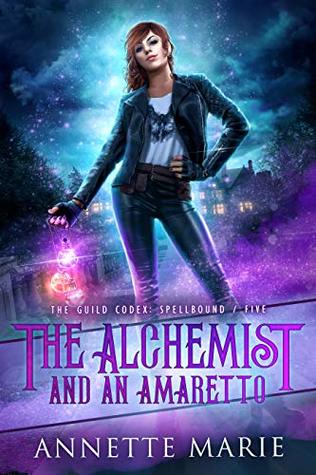 Synopsis: As a guild bartender, I can handle pretty much anything—mages, sorcerers, witches, the occasional demon. But show me anything family-related and I’d rather run for the hills. It doesn’t even have to be my family.

So I have no idea why I thought spending the holidays with Aaron’s mom and pop was a good idea.

Meeting his famous parents is already terrifying enough, but I’ve got a bigger problem. Students of his family’s renowned mage academy are being attacked on the grounds—and somehow no one has seen a single assailant? Unexplained tracks litter the nearby woods, rumors of forbidden alchemy are circulating the campus…and Ezra has been acting strangely since we arrived.

Something deadly is brewing in the shadow of Sinclair Academy, and the longer we take to uncover it, the more dangerous it becomes. But no matter the risk, we’ll protect the students.

And Aaron’s parents too, I suppose. If we have to.

Review: I always have a great time with this series and after reading the spin-off novel that is just before this story, I was curious to find out what the author was going to propose to us.

If we quickly see Robin at the beginning of the novel, our heroes leave for the Sinclair Academy. But here’s the thing: Tory isn’t necessarily happy to spend the holidays there where she knows she won’t feel like she belongs… On top of that, Ezra seems to be acting strangely and attacks are taking place on campus without anyone really understanding what’s going on. But our heroine and her friends are ready to do anything especially if their friends or family are in danger!

I had a great time again and I really enjoyed seeing the exchanges between Tory and Ezra even though I didn’t expect to discover some of the secrets. It was interesting, even if it was a little annoying to see Aaron in his universe and to see him take attitudes that we didn’t not, it’s understandable with such a family.

It’s a great urban fantasy series, if you haven’t tried it, I would recommend it with pleasure!

23 thoughts on “The Alchemist and an Amaretto by Annette Marie”