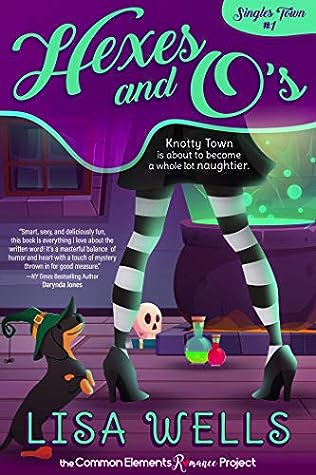 Synopsis: Inherited: One haunted house; One witch’s manual; One mandatory ‘to do’ list.
Not Inherited: One hunky neighbor; One memory-challenged ghost; One set of town gossips

When down-on-her-luck costume designer Remington Smith receives a surprise inheritance, she must return to the town she swore to forget. And complete a list of mandatory projects. And learn to cast magic spells. Magic spells? Too bad the hunky guy next door keeps getting in the way.

After a tornado ravages a small town, Jason Hart purchases ninety percent of the property as a cooperate training ground for Think Tank Innovations. But his first renovation crew quits. Then another. And another. They all say ghosts are running amok—and the whole town is hexed with an anti-love spell. Except Jason doesn’t believe in ghosts or (anti) love spells. And given how drawn he is to his spunky new neighbor, that doesn’t seem likely to change anytime soon.

While Remington works to complete her inherited to-do-list, avoid falling for her playboy neighbor, and learn how to cast spells that don’t backfire, she discovers a deadly mystery involving the orphanage where she grew up. A mystery so deadly that Jason starts trying to shove her out of town and out of his life. But Remington has never been good at taking orders.

Review: When I saw the cover and the synopsis, I must admit that I was really intrigued. I didn’t know the author, but how could I resist a story about ghosts and witches? It’s something I’m always interested in!

Remington lost everything overnight, so when she received an inheritance from her deceased former best friend – a house – she decided to return to this small town she never thought she would see again. But now, this move is going to change her life.

I have to say that I am quite surprised, because I was expecting something different with this synopsis. I was expecting a novel based on witchcraft or ghosts, but it wasn’t really that. I think the author had a lot of ideas, but I think she wanted to put too much into it and in the end there are many things that are featured and left open. And that’s a shame, because I think the novel could have been much better.

It was an interesting novel and I had a good time overall.

5 thoughts on “Hexes and O’s by Lisa Wells”