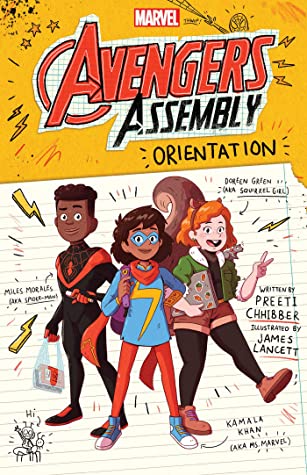 Résumé : A diverse cast of characters-Kamala Khan (Ms. Marvel), Miles Morales (Spider-Man), and Doreen Green (Squirrel Girl)-team up in their first-ever illustrated middle-grade series about ordinary kids with extraordinary powers!
Kamala Khan was an average middle school kid. That is, until a cloud called a Terrigen Mist swept through the New Jersey waterfront and activated her super powers! After taking on the persona of Ms. Marvel, she’s been fighting crime in Jersey City, and has caught the eye of some pretty well-established super heroes. But that’s not always a good thing . . .
After Kamala is caught by news cameras taking on a super villain–and accidentally destroying a building along the way–she gets a letter from Captain Marvel herself! It’s great that she’s fighting crime and sticking up for people, but maybe a regular school isn’t the best place to learn how to do that. If she wants to continue as Ms. Marvel, she’s going to need to take on some new extra-curricular activities-mainly, training with other young super heroes alongside the Avengers!
Now Kamala is the new kid at the Avengers Institute. Her classmates are all kids like her, they have special powers, but most of them have gotten into some trouble or drawn attention to themselves. The big news at the Avengers Institute this year? An academic decathlon in which students will group up into teams and compete against each other in super heroics. Kamala and her friends Miles and Doreen will have to go up against a team led by some kids who fight less than fair-and have some trouble with the concept of “fighting for good”-in this funny, action-packed look at some ordinary middle school kids who just happen to have some extraordinary powers.

Review: I was very intrigued when I discovered this novel. Lumen (French publisher) has released something very different with this book, which is a mix of a comic book and a novel and I found it very original.

We follow Kamala Khan, a young girl with amazing powers that allow her to become Captain Marvel. But she will also attract the attention of great superheroes who will offer her a place in a very special academy. It’s also where she’ll make new friends, such as the new Spider-man or Miles Morales.

It was a nice and different first volume, and it was a pleasure to find the story of Captain Marvel. I remember reading a comic about her before and I was happy to see her character again.

10 thoughts on “Orientation by Preeti Chhibber”