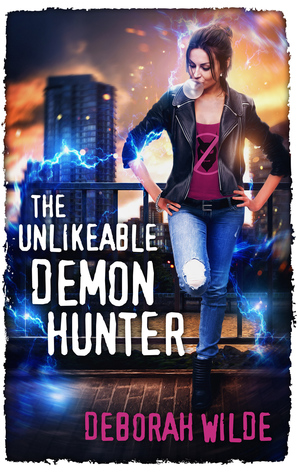 Synopsis: The Brotherhood wants her gone. The demons want her dead. Not bad for her first day as a Chosen One.

When Nava half-drunkenly interrupts her twin brother’s induction ceremony into a secret supernatural society, she doesn’t expect to accidentally torch his life-long dream and steal his destiny.

Horrified she’s now expected to take his place, Nava is faced with something she never wanted: a purpose.

The society isn’t cool with a woman in their ranks and teams her with an ex-rock star handler to keep her in line. Too bad he’s exactly what Nava’s always wanted: the perfect bad boy fling with no strings attached, because a hook-up with him is as dangerous as the vengeful demon out for blood–her brother’s.

And Nava’s the only one who can save him.

Odds of a good time before she bites it: much better.

Review: I saw some nice reviews of this novel and I had read the first volume of another series which was very nice. And then, a demon hunter? How could I resist it?

Yet, from the beginning, I had a hard time getting into the story. And unfortunately, after reading ¼ of the novel, I preferred to give up. Nava is a little too… everything and I had a lot of trouble with her character.

A series that is not for me.

9 thoughts on “DNF: The Unlikeable Demon Hunter by Deborah Wilde”