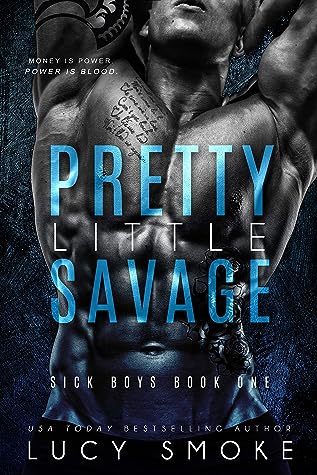 Synopsis: Rule No. 1: Don’t piss off the Sick Boys

The Sick Boys feed on the order they create. They rule Eastpoint University just as their families have for decades. But their power doesn’t stop there. The three of them are heirs to some of the largest fortunes in the world, and behind that kind of wealth lies an underworld of corruption.

On the surface, they’re perfect princes and he is their King. But underneath it all, they’re filled with blood, lies, and secrets. With all of their connections, they have the power to crush anyone who gets in their way. But just because they’re as warped as I am doesn’t mean I’m going to give them a free pass.

Because I, Avalon Manning, bow to no one, and I live to break the fucking rules.

Review: I came across this novel while doing a search on goodreads. I wasn’t expecting much, I didn’t know the author or the book, but I have to say that I’m glad I got into the story, because I really loved it! Like a lot!

Avalon has not had an easy life. Her mother is a drug addict and stripper and to pay for her drugs, she has repeatedly tried to sell her daughter’s body. Easy money. But our heroine managed to avoid it and never let it happen. It has forged her character, she is indomitable, fights and above all, she does not follow the rules. So when she is kicked out of her school and offered a scholarship to an elite institution, she has no choice. But this place is ruled by the Sick Boys, three boys who come from the richest families and who rule everything. Well, they’ve ruled until now, because Avalon doesn’t care who they are. She won’t bend, no matter what the threats are. But they can’t let someone rebel, and if they can’t get her fired, there’s only one solution: to watch her.

This was a great book. I was swept away from beginning to end and I am more than eager to dive into the sequel. Avalon is a determined young woman with a strong character, she is impressive. She is not like the others, she is strong, she had no choice. The boys are very intriguing, and I enjoyed learning more about them. There are still many secrets and I am very curious to find out.

I wonder how our heroine will cope with what happened at the end of the novel. It won’t be easy, but it promises!