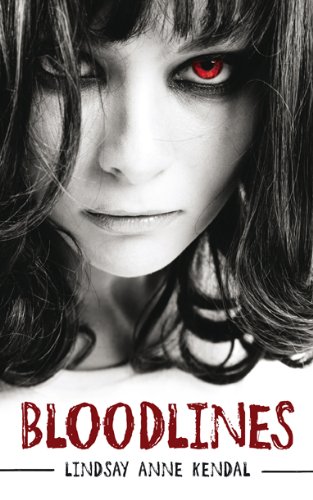 Synopsis : Keira Jameson used to lead a normal life, she just had a gift, passed down through the generations of her family. Now, after hearing voices, having strange dreams of others calling out to her, and her grandfather’s last words haunting her, she sets out to find other families like hers.

Along with her best friend Lily, the only person outside her family to know about her gift, Keira begins a hunt for her ancestors. A chance meeting with a young man, Lucian Turner, sets them on the right track, but their discoveries change the way Keira will see herself for ever more. Fear, superstition and heritage are shaping Keira’s future and she must face her enemies, even if this could mean losing her life.

She cannot escape her destiny.

Melliane’s review : Firstable I would like to thank Lindsay Anne Kendal who gives me the opportunity to read her first novel. I didn’t know this one at all , so I didn’t have any specific expectations before starting it. I can tell now this first volume was a great surprise.

We meet our heroine : Kiera and her inseparable best friend : Lily, who have gone to Salem to discover the truth about the Kiera’s ancestors. But they both didn’t expect to be welcomed by a band of four persons who just want to make her leave the city as soon as possible. We quickly like the two characters, these two young girls are very different but finally they are perfectly complements, which allows them to evolve together all along the story like two sisters.

From the beginning, we’re very intrigued by Kiera, we would love as much as her to know where she came from, what really happens, the limit of her powers…. Following all these rumors and legends about the witches of Salem was really interesting, I confess that I’ve been captivated by every story and I really liked each. The main story keeps us very curious all along this first novel. We learn some big revelations we didn’t expect about and whose we can only be surprised. A lot of discoveries allow us to understand little by little the elements to really know more at the end of the volume.

In a lot of books, we find a love triangle, but in this one it was different too. There aren’t two boys, no, but three ! All right I know the third is more subtle than the others. We could think it will be too much, that it makes the story more abstract, but it wasn’t the case. The author succeed to make each relation in a way we can believe it, we understand what Kiera sees in them all.

This book initiates a story more complex, some big changes happen for every characters and we’re very curious for the sequel. A great story about witches and demons which leads us in an inevitable fight.

Inessa’s review : First of all I would like to thank the author Lindsay Anne Kendal for allowing us to discover her novel.

Keira Jameson isn’t a girl like any other. Following the death of her grandfather, she decides to go to Salem with her best friend Lily to find other families like hers and learn more about herself. Once arrived, they quickly meet Lucian and his friend Jake. But the reception in Salem is far from being warm because the two young women are attacked by a group of four men wearing long robes with hoods.

I found this novel very lovely. Overall I liked the characters. I have hooked up with Keira, the heroine who seems very self confident and sure of her powers. Throughout the story we ask lots of questions about her: How is she so special? What did her grandfather want to say to her before he dies? Why does her eyes turn white when she uses her powers as those of the others become black? Etc. The answers are given little by little as we progress in the reading. Then Keira can count on the support of her best friend Lily who will always be on her side. Their friendship is so strong: they are very close like sisters.

The boys are all very endearing, although Tyler and Lucian annoyed me sometimes. I found their attitude a little excessive. After all, those two guys have always known each other before Keira, they just meet her so why being so jealous and possessive? It must also be said that Keira doesn’t do anything to calm the situation and this creates tensions in the group. But the arrival of another character, Eligos, could get everyone to agree. At least I hope so! Ah … Eligos is undoubtedly the most fascinating character, though we don’t know much about him except his nature. I hope we’ll learn more about him in the next books!

Regarding the story itself, I found the first half of the novel was a bit slow. Indeed Keira wants to know who or rather what she is, where she comes from and all sorts of information about her own bloodline and the bloodline of the four boys as well. It doesn’t happen much things. But I enjoyed the story of the five families during the witch hunts, trials of Salem etc. It was really interesting.

The second half of the novel, however, is much more rhythmic, especially with the emergence of Eligos (yes, him again!) There’s more action, the story becomes more and more exciting and I started to really enjoy the book from there. A multitude of enemies arrive and a war seems to be emerging. Keira and her friends will have to fight for their survival. The story takes an unexpected turn in Chapter 24. I enjoyed the passages from Lucian’s point of view. I even think they are my favorites!

To conclude this book is a pleasant surprise, the style is very fluid, it’s very entertaining. I can’t wait to read the sequel.