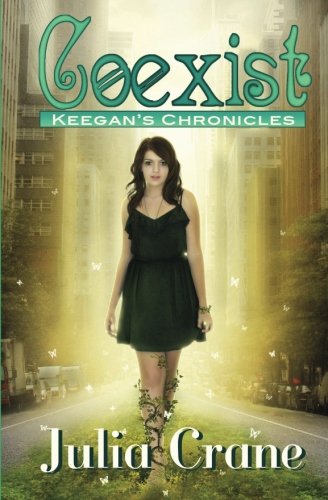 Synopsis: Sixteen-year-old Keegan is struggling to keep her huge secret from her friends—she’s an elf, descended from a long line of elves that lives in secrecy alongside humans.

In elfin society, mates are predetermined but not allowed to meet until they are 18. Against tradition, Keegan’s brother Thad told her Rourk’s name because his visions warned him she’d need Rourk’s protection, especially since Keegan will play a key role in the coming war between the dark and light elves.
Rourk finds himself drawn to Keegan’s side every time she thinks his name. He wants to talk to her but remains in the shadows, silently guarding her every time she mentally beckons him. A twist of fate thrusts the two of them together when Rourk is forced to step up his protection and make his presence known.
An ancient prophecy deeply entwines Keegan’s family in the future of their society. Depending on the outcome of the battle Keegan and Rourk may never have their life together.

Review: First of all I would like to say that I loved the cover as soon as I saw it. And it is the first thing which made me want to read this book. Then, it’s not common to have a story about elves, mainly for this kind of books, so I was very curious to learn more about this novel.
I confess it was a little difficult for me to get into the story from the start, but finally, this feeling has changed quite fast. I think it’s because of we fall in the middle of the Keegan’s life at the beginning without really understanding what’s going on. However, as the story progresses, we begin to like this young, determined woman, and we wish as much as she does, her meeting with Rourk.
We discover a new society very different and interesting. Every elves has a lifemate but they can only meet when they are 18. And before that, they can live as they want, like any normal child. On one side, I think it’s a good idea to have a normal life for a moment, but in the same time, it can happen a lot of things during 18 years. I don’t understand why they can’t meet, it’s difficult to do something like that. I don’t think it’s possible. Indeed, we can see that with Rourk who decides to not follow the rules. And I was very curious to read their meeting, and it’s very touching when it happens. We enjoy quite fast these two characters who love a lot each other. Who wouldn’t want to have a lifemate anywhere? Then, when they can have some time together to get to know each other, it’s really cute.
We can also find in this book a lot of other magic creatures, characters we didn’t expect to see all along the story. And it was a real pleasure. Indeed, I hope we could learn a little more about Donald, we can only know some little things about him, and it’s very intriguing. But I wouldn’t say more about this.
The writing style is nice and I read the book quite quickly. OK, I’ve to say that the book isn’t very long either. I think there are some parts of the book which aren’t developed enough, which was a pity. We pass from a character to another without any transitions, and it’s troubling sometimes, because we don’t know who is speaking, even if after some phrases we know it.
I didn’t expect this end at all, it’s a big surprise, and it questions everything we knew. I can’t wait to read the sequel to learn more about the Keegan and Rourk’s adventures.

Giveaway
As a part of the blog tour, we give away an ecopy of Coexist. For that, you just have to post a comment here with your e-mail address. You can earn an extra entry if you’re a follower and if you spread the word. This giveaway is international and ends on January 2, 2012.