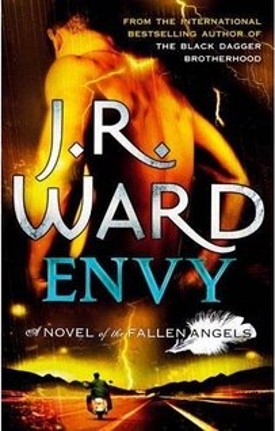 Synopsis: A man and a woman tread the lines of danger, desire, and deliverance in the new novel of the Fallen Angels from the #1 New York Times bestselling author of the Black Dagger Brotherhood series.

As the son of a serial killer, homicide detective Thomas “Veck” DelVecchio, Jr., grew up in the shadow of evil. Now, on the knife-edge between civic duty and blind retribution, he atones for the sins of his father- while fighting his inner demons. Assigned to monitor Veck is Internal Affairs officer Sophia Reilly, whose interest in him is both professional and arousingly personal. And Veck and Sophia have another link: Jim Heron, a mysterious stranger with too many answers… to questions that are deadly. When Veck and Sophia are drawn into the ultimate battle between good and evil, their fallen angel savior is the only thing that stands between them and eternal damnation.

Review: Fallen Angels is a series that I love but as I was a little bit disappointed by Book 2 and I was afraid to have the same feeling with this one. So I was apprehensive but this feeling immediately flew as soon as I read the first pages of this third installment of Jim Heron’s adventures. In fact, I found this book better than the previous one and I really enjoyed it.

The battle between good and evil is still raging. Back to Caldwell, Jim’s new mission is this time to save the soul of the Inspector Thomas DelVecchio Jr. ( Veck ), the son of a serial killer and the least we can say is that our hero will have a lot to do, especially when his enemy seems to already have a good head start. Indeed, Veck is in big trouble. Suspected of murder, he is kept under surveillance by Sophia Reilly, an Internal Affairs officer. She has to investigate about him and determine whether he can stay within the police or not. Immediately, these two characters are attracted to each other but Veck is a tortured man, with a complex personality and his family relationship with a notorious serial killer across the country complicates the situation.

Unlike the couple of the previous book, I liked Veck and Sophia here. Veck is a complicated man, he is aware that something is wrong with him, something very dark that could permanently turn him to the evil side, something that could turn him into a monster like his father. Evil is all around him but he tries to resist and not to give in to his impulses to violence, although this call is very tempting. Sophia meanwhile is a charming young woman, she feels good about herself, she is thoughtful and she is fully engaged in her work. She is a person who has succeeded in life despite what she had to endure during her unhappy childhood period.

This book is darker than the previous ones, and Jim will not be spared. His relationship with Adrian and Eddie, his allies in this war, will not cease to deteriorate to the point to jeopardize his mission because his enemy will take the opportunity to strike a blow. He will also face a terrible event that I did not expect at all. I was also surprised by Adrian’s change in this book and now I’m curious to see how he will evolve in the next book. In this volume we finally find out some details about Sissy and we even discover her family. Jim Heron’s sworn enemy also surprises me more and more. I really did not see her able to show an ounce of compassion at all… That said she is still a formidable enemy and use all imaginable means to destabilize her opponent. The scenes from Nigel and Colin’s POV were also quite interesting. Like all J.R. Ward’s novels, the reader sees what is happening on all fronts and it’s still captivating.

The world created by J.R. Ward is really fascinating. The action takes place in Caldwell and like the first book, there are a few references to The Black Dagger Brotherhood, the other Ward’s series and it’s always a pleasure to see these two worlds the author has created overlap each other, although they are completely different. Moreover, Veck appears in Book 9 of The Black Dagger Brotherhood, Lover Unleashed and I think it’s better to read Lover Unleashed before this one.

So it was a very good book and the revelations at the end suggest that Book 4 will be as captivating as this one.