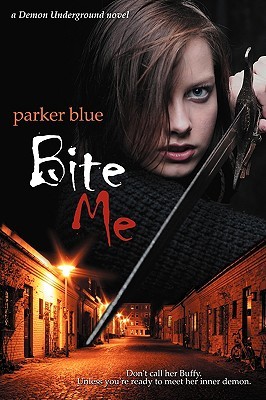 Synopsis: Eighteen-year-old Valentine Shapiro got a raw deal in the parent lottery. Her father was part incubus demon, and her mother’s never forgiven her for that. Thrown out of the house by her mother, Val does the only thing that seems to make any sense—she takes aim at the town vampires. A stake a day keeps the demon at bay. Soon enough, she finds herself deep in the underbelly of the city, discovering the secrets of the Demon Underground with the help of her faithful hellhound, Fang, and fighting to save those she loves. Whether they love her back or not.

Review: After the bad Angie had told me to read many books including this one, I could not wait long before starting it. I must say thatshe reads a lot of books like me (which helps a lot) and her opinion is always sharp. So I was curious to see how the first volume would be. But it is also a reason why I expected something wonderful, maybe a little too much. I struggled to really get into the story at first, it’s a bit long for me…

Val is a girl both demon and human, a nature she hates from the start and it is also why she always tries to control everything not to let this second entity surface. But when one day she was thrown from her home by her own parents, she must learn what it means to live alone, and she does not have much choice. She will join a special team that tracks and handles supernatural creatures, including vampires. Yes because this first volume deals with vampires and their human ancestries. It was very interesting to see the ideas of Parker Blue for this new universe. It is always exciting to see how the supernatural creatures will be put in place. This novel let us learn a lot about our heroine, her past and her feelings, but also her family and the consequences of their rejection. It was also heartbreaking to see this young girl who is just waiting for someone to love her and to stay with her. And something is increasing throughout the book when we really get to know her.

Well it is true that I had a little trouble starting to hang on the character of Valentina. She is too confident and everything happens too easily for her (well in any case it’s what I think). It is finally a not really plausible start. But the more we advance in the story, the more we understand her character and we’re touched by her. We understand the duality that inhabits her and her feelings for Dan are complicated to manage. I must say that for the last half of the book I managed to get into the book and I loved to learn more about her and her teammate.

I think that now the character I’m the most curious about is Micah. What a character! He is really intriguing and I would like to know what he wants and what he can actually do. I think it will be a point that I would approach with great pleasure in the coming volumes. Dan is also a character that I enjoyed, despite his reactions he is very enjoyable to follow along with our heroine. Didn’t I mention Croc? I loved him too, but it’s a bit like that for Val, it still took me some time before I was able to be attracted by the character (maybe I’m too hard).

We can read the book really quickly, and I was quite eager to understand what was happening and who was behind all these events. And I must say I did not expect this revelation at the end of the story. I’m curious to read the second volume to make me a better idea of the series.

14 thoughts on “Bite Me by Parker Blue”