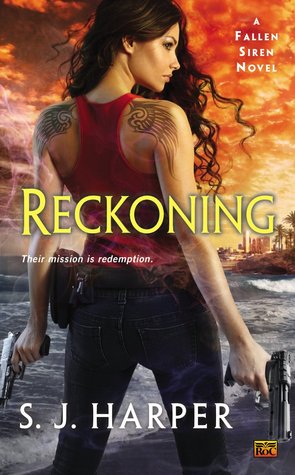 Special Agent Emma Monroe has a secret. She’s a Fallen Siren, cursed by the gods and banished to Earth for her failure to prevent the kidnapping of Persephone. As an FBI agent she saves the lives of others believing redemption could be one rescue away.

Her partner Zack is a werewolf and former Black Ops sniper who once carried out a string of questionable assignments. Now he’s determined to atone for his past. Ironically, there’s a portion of his past Zack doesn’t remember—an affair with Emma. Giving into their attraction for one another almost led to their undoing. Now it’s back to business as usual.

While trying to unravel the mystery behind a series of kidnappings in Southern California, Emma and Zack become entangled with political tensions in the vampire and Were worlds. Not to mention the struggles they face in their relationship with one another. With so much uncertainty, they come to realize the only thing they can really count on is one another…or can they?

Review: I loved the first volume and I confess that I could not wait to get into this one when it came out. The previous volume did not end necessarily well as (it’s said in the synopsis) Zack forgot over his relationship with Emma.

It was a pretty heartbreaking ending, especially when we know the feelings of the young woman and the reasons behind all that.

Monroe Emma is cursed, and this fact is reflected in her everyday life. Having accepted (or is this the case?) to leave Zack behind, she begins a relationship with the vampire king that we had met before: Kallistos. I can honestly say that I was quite surprised at first, because I thought that the authors would drag the story between the two men. Yet in the end I think it’s not so bad like that and it was interesting to see how the young woman was with him. It’s quite interesting to see her connection with this vampire, she is sure that nothing is happening between them and yet despite what they’re saying, I think there is currently something. Of course it’s different from the story that Emma has with the wolf but a link is forming between them and they also care to each other. I think there may be more on the side of the King (although it’s really quite difficult to confirm that) but I admit that I’m curious to see what will happen afterwards. As for Zack, I admit that I was really sad for them. Although the young woman tries to come off, she does not succeed and finally flirts a lot with this prohibited man. I admit that I wanted to shake her sometimes because it hurts others too. The man knows that he has forgotten something important and knows that there is something with Emma but he does not reject her and stay with her. But it’s true that in the end, the relationships are very sad to follow and the conclusion does not help at all. I was expecting it to be like this, but I find it a shame. I need volume 3 !!!! Yes, I want to know what will happen now in this complicated trio.

In terms of plot I admit that the whole thing was pretty interesting. Girls from private school are disappearing and our two heroes must manage to discover what happened. The story develops slowly and becomes much more complicated than expected, mixing vampires intrigues and conspiracies in everything. But that’s not all because the Zack’s enemies and Kallistos’ are also present in the book and I’m sure it’s not over.

It was again a very good story I enjoyed it even though I am sad by the events. There are some very good ideas and we can read the whole quite quickly (I must say that I was eager to get to the bottom of the story!). I’m really looking forward to have more and discover the further adventures of our beloved Siren.