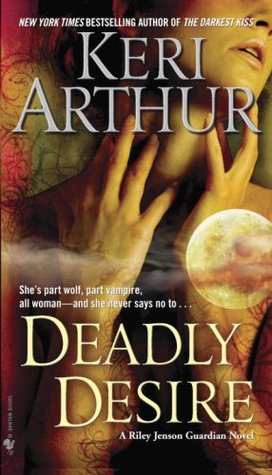 Synopsis: Seduction that kills. Pleasure to die for.
She just can’t resist . . . Guardian Riley Jenson always seems to face the worst villains. And this time’s no different. For it’s no ordinary sorceress who can raise the dead to do her killing. But that’s exactly what Riley expects to find at the end of a trail of female corpses used—and discarded—in a bizarre ritual of evil. With pressure mounting to catch one fiend, another series of brutal slayings shocks the vampire world of her lover, Quinn. So the last thing Riley needs is the heat of the upcoming full moon bringing her werewolf hormones to a boil—or the reappearance of a sexy bounty hunter, the rogue wolf Kye Murphy.

Riley has threatened Murphy with arrest if he doesn’t back off the investigation, but it’s Riley who feels handcuffed by Kye’s lupine charm. Torn between her vamp and wolf natures, between her love for Quinn and her hots for Kye, Riley knows she’s courting danger and indulging the deadliest desires. For her hunt through the supernatural underworld will bring her face-to-face with what lurks in a darkness where even monsters fear to tread.

Review: Reading directly Volume 7 after Volume 6 was a real pleasure. Of course, there is a new investigation, new frightening murders and new characters. An explosive mix.

Riley is given a case featuring murdered girls and zombies which we do not really understand the existence or even their goal. This is already a rather complicated matter in itself but when vampires are also killed, including one of Jack’s friends, things become much more complicated. Would I forget to mention the presence of Kye, the wolf we had met in a previous book, throughout the story? I was immediately intrigued by this character, we learn a few more things about him but it forces us to ask many more questions. His nature is more complicated, and I looked forward to understand what he really was and what he was capable of. We wonder from the beginning what he wants and what he desires from Riley. But it is true that I realized pretty quickly about the revelations given at the end of the book, but it was interesting to see them both evolve throughout the story. Especially their verbal sparring.

This volume shows a facet of the executive board that I had not yet seen. Indeed, the investigation that we follow is very quickly resolved, and we unmask the culprit in one of the first parts of the story. However, this time, our young heroine needs to find some evidences and this research is ultimately more difficult to elucidate. I did not really expect the reasons for the killings, but I think it’s a blur. However, many issues have surprised me through the chapters.

I enjoyed the relationship between Quinn and Riley in this volume. They become a real couple and it is very nice to read the scenes where they are together. We understand that it is difficult for them to actually accept what is happening and to make concessions but their feelings eventually help them to change their way of life, something that was not possible in the previous volumes.

The story quickly carried me away and I have to say that this volume is a watershed in the life of our heroine. I am very curious to read the next novel to understand how Riley will be able to manage her life now. I must say that everything is complicated.